Why I'm Worried About Wonder Woman 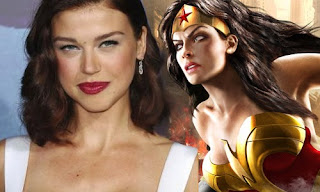 A few posts ago, I talked about the casting of Adrianne Palicki as Diana Prince/Wonder Woman in the new television version of Wonder Woman, produced by David E. Kelley (Picket Fences, Ally McBeal, Chicago Hope, The Practice, Boston Public, Boston Legal).  As ecstatic as I am about the choice of the new Wonder Woman (seriously, she is a great actress, and she consistently blew me away in Friday Night Lights, even with her terrible storyline in season 2), the overall series has me a little concerned.

I am actually a David E. Kelley fan, although his previous work doesn't necessarily lead me to having confidence in how he will handle a superhero show.  His previous shows always had a great mix of drama and quirky characters and dialogue, and I suppose I could see that working with Wonder Woman.

The leaking of the casting sheet has me a little worried, however.

We are committed to diverse, inclusive casting. For every role, please submit qualified performers, without regard to , race, age, colour, national origin, ethnic origin or any other basis prohibited by law unless otherwise specifically indicated.

[MYNDI MAYER] Female, open ethnicity, 30s. Publicist, Press Secretary and Wonder Woman’s confidant and nurturing best friend. Worldy and edgy. Sexy and persuasive, her appearance is part of her strength. She is beautiful and put together - dressed expensively in the latest fashions, plus she’s got a bit of bite, clever wit and sass. She’s the prodder of Diana’s social life…SERIES REGULAR. ASP.

[ETTA] Female, open ethnicity, 30s. Diana Themyscira’s always cheerful personal assistant. A bit charactery , but real, pretty and effervescent. She is blindly devoted to Diana. She’s her unrelenting cheerleader, with unwavering, unabated support. On the vulnerable side, she sees the humble and sympathetic sides in everyone, including Diana…SERIES REGULAR. ASP.

[CEO HENRY DEMETER] Male, open ethnicity, 40s. Acting CEO of Themyscira Industries. Grounded, intelligent and deeply devoted to Diana. He runs the day to day operations of the company and acts like an Uncle to Diana although he could be a possible love interest down the line…SERIES REGULAR. ASP.

[ED INDELICATO] Male, late 30s to early 40s. Stoic and tough, he is a liaison to the police department. Devoted and loyal to Diana, he’s blue collar, a no nonsense kind of guy. A chiseled man who subscribes to the old fashion rules of relationships - men don’t talk much. His job comes first and he wouldn’t make room for the possibility that there is potential romantic relationship with Diana…SERIES REGULAR, 10/13.

It is the description of Diana that has me a little worried.  I'm not sure I like the idea that she is being described as "a vulnerable woman."  She is, after all, an Amazon princess, raised on the island of Themyscira by Amazons, and about as tough as it is possible for anyone to be.  I don't know that the word "vulnerable" really applies to Wonder Woman.  Also, the description of her as being "a real woman who yearns to live a normal life" strikes me as kind of odd.  I always understood the character as being very proud of who she is and where she is from, and here only to provide the help and guidance that her training and background allow.  Wanting to be normal has never been something that I equated with Wonder Woman.

I really hope that the television show doesn't lessen the strength, independence, and assertiveness of the character just to make her more accessible.

A strong female character like Wonder Woman is just what television needs, in my opinion, and I really hope that Kelley doesn't water her down just to fit some social idea of feminism.

I will, however, be giving this show a chance, and I am hoping for the best.

Until Next Time, television could really use a good superhero show again, and I will probably return soon with a post or two on that very idea.
Posted by Josh Man at 11:36 PM