It is Better Than Skyline, So At Least There is That 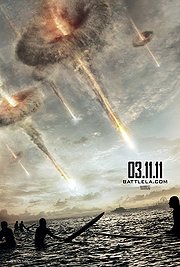 In my last post, I said that I was going to avoid this movie, planning to just pass on the advice of one Roger Ebert (in what is the most amazing negative review ever written).

But then I realized, that isn't what my job is.  My job is to give you the unvarnished truth on film (and television) as I see it.

That meant I had to go into the dark myself to let you know how close to the truth Roger Ebert's slams could be.

In fact, if I had never seen Skyline (or better yet, if cooler heads had prevailed somewhere in Hollywood and Skyline was never made), then I would feel comfortable telling you that Battle: Los Angeles was a terrible, horrible, no good, very bad

At least Battle: Los Angeles has a storyline (where as Skyline was basically just a trailer).  Granted, the storyline isn't anything amazing or inventive, you can pretty much predict exactly where it is going throughout the whole thing, but it is a story, and that's something that Skyline can't claim.

The acting is pretty terrible, although I don't blame Aaron Eckhart or Michelle Rodriguez or anyone else in the film for that.  They don't really ever get a chance to shine.

The dialogue is utterly ridiculous.  I was often reminded of the worst dialogue of all time from the first X-Men movie.


Storm: You know what happens to a Toad when it is struck by lightening?

Storm: The same thing that happens to everything else.

For those of you who don't remember it (and still have nightmares), that line is actually in the X-Men movie, and it seems like the writer of Battle: Los Angeles might have thought that that was some genius dialogue, because that is the type of dialogue you can expect in this film.

The special effects aren't as terrible as Ebert would have had us believe.  But they weren 't great either.  And to be honest, there is some massive Michael Bay/Paul Greengrass disease going on in this movie to the point that the camera shakes so much you can't really tell what is going on or what any of the aliens really look like anyway.

And the editing is so frenetic it is often impossible to tell what the hell is going on.

I really can't stand this type of filmmaking.  It is such a cheap way to make it "feel like you're really there."

Go watch a James Cameron action scene.  You can tell exactly what is going on, where exactly it is happening, and I dare you to tell me that you don't feel like you are right there in the action, even though he isn't shaking the camera like you're riding a wooden rollercoaster.

Until Next Time, the best news is that the movie takes place in Los Angeles in August of this year.  And yet a gas station is shown and the gas is at $2.93 per gallon.  If the gas is $2.93 in LA, that means it will be much cheaper here.  If it takes an alien invasion to get gas to around 2 dollars again, well I say, "WORTH IT!"
Posted by Josh Man at 11:39 PM