One year, I got it in my head that I should review every single pilot of the new network television season. 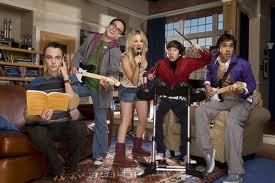 While this is quite an ambitious project, I actually succeeded.  It was the Fall of 2007, and one of the new shows that debuted that season was a little sitcom called The Big Bang Theory.

This is one of my favorite television shows now, and while others might think that it has done everything it is capable of and is creatively in a funk, I disagree.  I think that it can continue it its current entertaining vein for quite some time without losing its steam.

When the pilot aired, however, I wasn't as fond of it...

Yeah, it had it's moments, and I like the Johnny Galecki a lot.  You might know him from Suicide Kings, but more likely as David Healy on Roseanne.  Not so sure about his roommate, played by Jim Parsons.  He got some great lines in the episode, but I never really laughed at them.  Looking back at the lines, I should have laughed, but I just didn't like the delivery.  The character really seems a little too ridiculous to me, I guess.  I also wasn't too thrilled with the female lead, mainly, again because the character didn't appeal to me.  I doubt I'll pay too much attention to this show.  If I'm too lazy to find the remote after How I Met Your Mother (which was, as always, Legen... wait for it, and I hope you aren't lactose intolerant, because the next part of the word is... dary) I might leave it on, but it's not one that I'll have to watch.

Interesting fact, Kaley Cuoco who plays the female lead in the show was on an episode of My So Called Life as young Angela Chase, Claire Danes's character.

Looking back, I can remember having these feelings.  Loving the show as I do now, it is a little strange to take myself back to that place and remember my dislike of Sheldon and Penny as characters and how they were portrayed by Jim Parsons and Kaley Cuoco.

There was a very real possibility that this would not be a show that I watched regularly (the idea that this possibility very much existed horrifies me now).

In fact, I don' think that I watched another episode of The Big Bang Theory past the first episode for the next six or seven months at least.

Then, however, I went to my parents house one weekend and, with nothing much to do, I discovered that my mom had the entire season on her DVR.


I then proceeded to watch nearly the whole season in one sitting, and while, at first, it was just something to do, it quickly became a favorite television show of mine.

Now, however, it is a show that I make sure to catch week in and week out, in large part because of the characters so ably played by Jim Parsons and Kaley Cuoco.

Until Next Time, Bazinga!
Posted by Josh Man at 5:58 PM