I have to say, for a large part of this television season, I was worried that I might have to forgo the award this year.

While cable has consistently delivered new and fantastic television including Walking Dead and Game of Thrones this year, both of which immediately placed themselves among my favorite television shows of all time, network television has been sorely lacking in great new shows of late.

To be fair, I feel like it is easier to make a more challenging and original television show on cable where you can become a massive hit with the same number of viewers that will get you canceled a couple of episodes into a season on NBC.

That's part of the reason that I give this prestigious (even if only in my mind) award only to network shows.  They are already working at a deficit.  Since the shows that I like are original and higher concept and not the cookie-cutter  procedurals or (God-forbid) the supposed reality shows that don't reflect any version of reality with which I am familiar, it probably isn't surprising that only one of the shows I've awarded in the last seven years is still on the air.  Despite the networks' apparent unwillingness to stick with original and challenging television fare, I, for one, look forward to strong network television shows and will continue to support them and promote them in my own small way.

That isn't to say that I still would have awarded a network television show had one not deserved being recognized, and for the first half of the season I truly thought I would go without awarding a show this year, which is even more sad when you consider that most years I recognize more than just the winner.  This year, only the winner will be recognized.

Before we get to that show, lets take a look at the previous six winners.  The links will take you to the full posts if you want to read more on the reasons for my choices as well as the other shows that I acknowledged that year (this being the first year that only the winner is worth noting).

And now onto the moment you have all been waiting all season for....

Like I said, for a large portion of the season, I thought that this year might not have any show I felt was worthy of being awarded, luckily on February 7th, FOX debuted this year's winner, the fantastic Chicago Code. 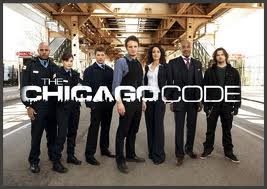 Chicago Code, created by Shawn Ryan who is probably best known for his FX hit The Shield but who also served as the showrunner for former JCFBNSOTS runner-up The Unit.

This show, similarly to The Shield, is a cop show that goes beyond the typical overused tropes of a cop show.

While there is a weekly case or mystery in Chicago Code, the overarching story continually stays at the forefront.

The show actually reminded me greatly of what I consider the second best television show of all time, The Wire.  While the cops are ostensibly the stars of the show, we are also shown the villain's side of the story, and the alderman stands up with Stringer Bell as a fantastic character that you love to root against.

The story is brilliant, but it wouldn't work without the great writing and even better performances backing up the strong characters.

The show has a realism that is often absent in cop shows, adding a sense of suspense and a connection to the characters and the outcomes of the episodes week to week that means the viewer is legitimately invested in the outcome.

That is rare in today's network television.

And the episodic nature of the show is sadly becoming less common as well, especially in what is technically a procedural cop show.

It is very sad that Chicago Code didn't gain more of a following and is ending after just one season, luckily the show was able to provide a satisfying conclusion to the show while holding open the possibility of the story continuing.

If you haven't had a chance to check out the show, the entire season is available on Hulu Plus.  If you don't have access to Hulu Plus, I highly recommend purchasing this show on DVD (or BluRay) when it becomes available.

The only regret you will have is that it is such a short run.

Until Next Time, I am glad that there was at least one show worthy of our attention this year, but I hope that next season brings us more shows to celebrate.
Posted by Josh Man at 7:31 PM