In Brightest Day, my review of Green Lantern 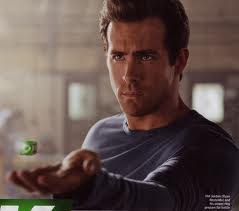 First of all, Ryan Reynolds is Hal Jordan.  I really wanted his old "Two Guys, a Girl, and a Pizza Place" co-star, Nathan Fillion (Captain Mal on Firefly, Captain Hammer in Dr. Horrible, and Frank Castle, not a Captain, in Castle) to be Hal Jordan, but Ryan Reynolds encapsulated the character quite succinctly in my opinion.

The acting and characterization was one of the (many) strengths of this film.

The effects were more than adequate; sure, you could tell they were cg effects, but that's almost always the case, and they didn't get in the way at all, but did assist in the story.  As cg continues to improve, the Green Lantern franchise will no doubt benefit.

The action and story were stellar, and the movie overall is engaging and a hell of a lot of fun.

The only negative thing I have to say about the film is that it flies by far to fast.  Seriously, the story and action are heading at speeds unknown to all by Green Lanterns flying from far flung sectors back to Oa at the center of the universe.  I wish that the film had been longer and taken a little more time to breathe, but even that complaint really didn't hinder my enjoyment of the film at all.

In fact, and I recognize my incredible love of the characters of the Green Lantern Corp might have some play in this reaction, but it was instantly among my favorite comic book movies of all time, and is currently at the top of the list for 2011 films so far.

Sorry, Super 8, your run as top film of the year was pretty short.

If you have any love of the character, I can guarantee that you will love this movie.  If you don't know anything about the Green Lantern Corp or Hal Jordan, I still think you will be in for an enjoyable ride.

I honestly don't understand why the film is getting the negative reviews that it is getting, because other than the fact that it was over way too fast, I can't say a single negative thing about it.

Until Next Time, In brightest day, in blackest night, no evil shall escape my sight.  Let those who worship evil's might beware my power, Green Lantern's light!
Posted by Josh Man at 5:56 PM