With Production Value and Story, My Review of Super 8 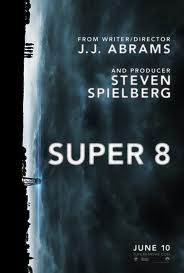 I admit to being a big fan of J.J. Abrams.

I loved the new Star Trek.

You know how I feel about LOST.

I watched Felicity up until she cut her hair, was obsessed with Alias, and am currently loving every second of Fringe.

Spielberg, especially the Spielberg that this movie evokes, also holds a special place in my heart.

So it shouldn't be a surprise that I was a big fan of this movie.

I wish that J.J. would lay off of the lens flares a little, but other than that there isn't really anything negative that I can say about this movie.

Even in this summer of sequels (Hangover 2, Kung Fu Panda 2, Fast Five, Harry Potter 8, Transformers 3, etc.) and prequels (X-Men:First Class, Pirates of the Caribbean, Rise of the Planet of the Apes, Puss in Boots, etc.) I can't really claim that this movie is all that original.

Because it definitely does evoke Spielberg from the 80's, ET, Close Encounters Spielberg.

But it also evokes Stand By Me.

And Judd Apatow's Freaks and Geeks came to mind a lot as well as I watched the middle school protagonists. 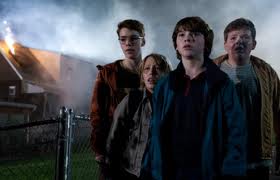 No, there is a lot that we've seen before in this movie, but it is the fantastic melding of Spielbergian concepts and themes with the coming of age/adolescence adventure of Stand By Me and the realistic 80's aura and reality of the teenagers that Apatow had captured so brilliantly that helps make Super 8 as fantastic as it is.

And it is a very good story as well.

It is a tad predictable, but it works, on an emotional level and with the pulse pounding excitement of a good monster movie as well.

It isn't original, per se, but it is original in the fact that we don't get this type of film, as full of heart as it is thrills, as often as we used to when Spielberg made them regularly.

Until Next Time, Take some time out of your busy summer to catch this movie and remember the way that summer blockbusters used to be made, before Michael Bay blew them up.

If you can get past the lens flares (J.J. Abrams weakness, much as a shaky camera and lack of story haunt Bay) you won't regret it.
Posted by Josh Man at 1:17 AM