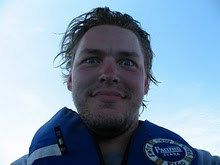 It is common knowledge the love I have for one Justin Tiemeyer of Cavemen Go, but sometimes I have to respectfully disagree with his opinions.

This is one of those times.

Currently, Justin is working on trying to discover the best show that aired on the over populated Thursday night.

Sure.  The problem, however, comes from the fact that there are two clear choices for the funniest shows to air on Thursday this last season

AND NEITHER OF THEM ARE INCLUDED IN JUSTIN'S BRACKET!!!!!!!

(Breathe, breathe, it will be okay, Josh Man)

Okay, sorry about that.  I'm better now, I swear.

Anyway, as I was saying... well, let's take a look at his bracket, shall we? 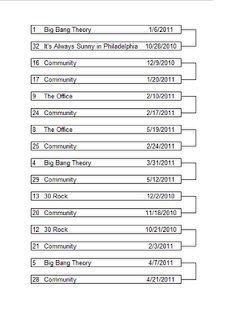 As you can see, the only shows in contention are Big Bang Theory, It's Always Sunny in Philadelphia, Community, The Office, and 30 Rock.

His seeding system is based on ratings, which is severely unfair to It's Always Sunny, considering that FX doesn't get near the same number of homes as do the network shows.  I'm not sure how to fix this issue, other than perhaps using some sort of rating system such as on IMDb or tv.com.

But that isn't my main issue.

The funniest show on NBC (and Thursday night, if not television in general right now) is without question Parks and Recreation. 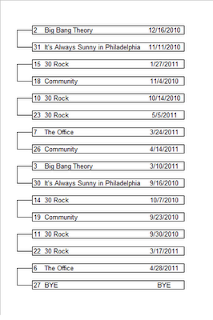 While the show took a little time in its shortened first season to find a foothold, it has quickly become by far the most consistently funny
comedy currently on television.

With the same awkward type of humor that Seinfeld and Ricky Gervais pioneered (and for which The Office is currently known), Parks and Rec also builds far superior stories and humor out of the strong characters, which it refuses to sacrifice for an easy joke (unlike The Office and far more regularly 30 Rock).  There is the outrageous situational humor that you find on The Office, 30 Rock, and It's Always Sunny for that matter, but the characters are  far more real and therefore the situations are that much more hilarious.  And, as I said, it is at a consistent high level unlike any other show on the night.  Since hitting its stride very early in season 2 (and considering that Season 1 was only 6 episodes long, that as far into its run as it sounds), there has not been a single episode of Parks and Rec that wasn't fantastic.  The same cannot be said for any of the shows in Justin's bracket.

On FX, all the attention is given to It's Always Sunny, and it deserves that attention, but the last couple of years, it has actually been outshone by the show that it is paired with, The League.

While you might get a little more enjoyment out of the show if you are an avid Fantasy Football fanatic, the show is hilarious even if you can't tell the difference between a corner back and a half back.  Again, it is the characters that make The League so hilarious.

If you do play Fantasy Football, you will recognize all of the different types of characters on the show in how they obsess over their lineup and dish out their trash talk, but if you don't you will still recognize your friends (or acquaintances, because like It's Always Sunny and the show that clearly inspired it and this, Seinfeld, as recognizable as these characters are, you don't really want to be that close to them as to call them friends) in the banter and situations that they get themselves involved in.

So, while I recognize the intent for what Justin is attempting to accomplish with his little bracket, when he's leaving out the two funniest shows of the night, I'm not sure that I can officially condone his findings.

If on the other hand you are wanting to discover what the 3rd best show on Thursday night is, then by all means, check out the tournament in progress at Cavemen Go.

Until Next Time, for my money, I'll place it on the shows that featured Lil' Sebastian and introduced us to the genius of the Bathroom Cubby.
Posted by Josh Man at 2:36 PM