Sucker Punch is What Happens to the Audience

The visuals are amazing, you can't expect anything else from Zach Snyder, the soundtrack is pretty freakin' fantastic, but for some reason the movie just doesn't work.

There is a good movie in there, it is just surrounded by a very poor attempt at a cool idea.

Some scenes that we see take place have absolutely no bearing on the real world of the film, they flat didn't happen, in fact something completely different must have taken place, but we have no clue what since we only see the film from in the somewhat deluded minds of the characters.

Something is happening in the real world of the film, and it even somewhat (probably) relates to what we are seeing on the screen, but not enough for any of the action on the screen to really concern you, or to ever really allow you to get connected to the characters.

I don't mind that the main characters have created an alternate reality for themselves in order to protect themselves from the hell that they are in, I think that that is an interesting idea, but the implementation of the idea just doesn't really work.

The thing is, working with multiple fake realities upon fake realities is not the best way to make a film.  It just doesn't work too often.  (Of course, when it does, you get Inception.)

My friend Justin (from good old Cavemen Go) saw the movie with me and described it as multiple music videos put together.

That's about what the sequences boil down to.

Look, the movie looks amazing, but it isn't a very good film. 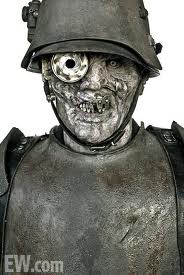 Sure, it is hard to argue when a film introduces you to Nazi Steampunk Zombies (yeah.  I know.  Awesome) no matter how imaginary they are.

Your time and money is probably best spent elsewhere.

Until Next Time, it really is starting to seem that Zach Snyder is capable of making a film under only one visual style (see 300, Watchmen, and Sucker Punch) and it is a visual style that I do not think fits Superman at all.  I really am not excited that he is the person bringing the Man of Steel back into theaters, but that is probably best saved for another post.
Posted by Josh Man at 10:53 PM