Captain Jack, by which I mean Harkness

That's right, Starz has announced the official premiere date for the fourth season of Torchwood (the first three being strictly BBC productions and all available on Netflix, go on, get watching, this post will still be here when you get back) and it is July 8th.

The season, titled Miracle Day, is an international affair.  One day, no one on Earth dies.  Then the next day, no one dies.  Sure, at first it sounds great, but it quickly becomes problematic, and only Torchwood can hope to figure it out, led by their tri-sexual (as in he'll try anything) and similarly immortal boss, Captain Jack Harkness.

Torchwood's first three seasons each got better, and I'm hoping that the trend continues despite the show having Starz aboard as co-producers.

It is still being run by Russell T. Davies, who created the show (as well as brought back the show this is a spin-off from Doctor Who and also created Queer as Folk), and added to the writing staff for this season is Jane Espenson (who has also written for Buffy, Angel, Firefly, Dollhouse, Battlestar Galactica, and co-created Warehouse 13), so there is actually quite a lot of reasons to get excited about the new season.

Joining John Barrowman (Captain Jack) and Eve Myles (Gwen Cooper) and other familiar faces from the first three seasons are Mekhi Phifer (probably best known for his run on ER), Lauren Ambrose (Six Feet Under), and Bill Pullman (the President in Independence Day) as the villain of the series.

Torchwood is a spin-off of the fantastic sci-fi show Doctor Who, as Captain Jack was a former companion of the Doctor and the Torchwood institute he leads is the remnants of an organization started in order to protect earth from alien threats (such as the Doctor).

From the aftermath of Season 2 of the new Who, Torchwood began as a spin-off.  It took a little bit of time to find its own way, but once it did (towards the end of the first season) it took off running to a fantastic second season that seemed impossible to top.  The third season succeeded, however, as more of a mini-series telling one long story.  The fourth season looks to be a mixture of a full-season and the single story idea that worked so well in the shortened third season.

Either way, I'm on board and excited for the new adventures of Captain Jack and his team.

Until Next Time, here is the promotional poster for the new season. 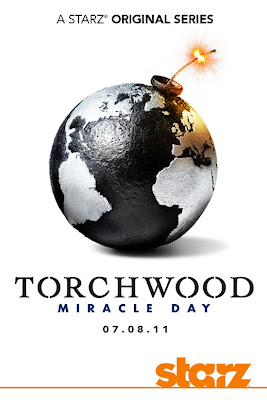