Is There a Doctor in the House?

On a day when I wore my new Woot Shirt called "It Came Out of Nowhere" featuring the DeLorean (from Back to the Future) crashed into the TARDIS (from Doctor Who), it was fitting that some big Doctor Who news was released.

The only other thing that could have been as fitting would have been an announcement about Back to the Future 4 (but, sadly, that dream is still deferred).

BBC announced today that the 6th season (or series as the Brits would say) of Doctor Who will premiere on April 23rd on BBC America.

That's the same day that it will air across the pond! (Being the Atlantic Ocean, not Karen Gillian's character, and companion to Matt Smith's Doctor, Amy Pond.) 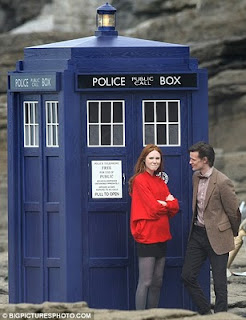 So get your Sonic Screwdrivers ready, Whovians, because the wait is almost over.  The Doctor is back!

And, since I wore the awesome shirt today (over which I got lots of compliments, including a classmate who declared she was literally in love with my shirt, which seemed rather sudden since she was meeting my shirt for the first time, but I digress) and got the awesome news about no wait for new episodes of Doctor Who, it seems an ideal time to announce that this season I will be posting my thoughts soon after the new episodes air this season.  So, if you are a fan of the show, feel free to discuss the season as it occurs right here at Fat Train!

Until Next Time, be careful as you traverse this timey-wimey wibbly-wobbly existence in which we are situated, because time machines can simply appear out of nowhere!  (Seriously, isn't that shirt brilliant?  I mean, "It came out of nowhere" could refer to either of them!  I love it.  Was the DeLorean cruising about to hit 88 mph when the TARDIS materialized?  Or was the TARDIS sitting there totally camouflaged as a 1950's style London Police Box when the DeLorean (already traveling at 88 mph) appeared out of nowhere?  Or perhaps they had both just appeared!  You never can tell when dealing with traveling time machines!  I really love that shirt.)
Posted by Josh Man at 7:58 PM

Email ThisBlogThis!Share to TwitterShare to FacebookShare to Pinterest
Labels: Doctor Who, news, tv