As I am sure the recent posts on the upcoming Wonder Woman television show (with only the exception of the casting of Wonder Woman herself) have made clear, my hopes aren't too high for the upcoming television show.  As I've stated, I don't feel that David E. Kelley has a handle on what makes Wonder Woman such a great heroine.  In fact, I feel like he is just going to make her another of his quirky, awkward, and unsure women.  If that is how it is written, even the great acting of Adrianne Palicki won't help this show.

Add in the fact that this is the final season for Smallville, and we could be facing the very real possibility of a television season without a DC Super Hero very soon (assuming that Wonder Woman will get quickly cancelled).

This simply cannot be allowed to happen.

Recently, a friend of this blog wrote a post about what should replace Smallville as the new DC television show (before Wonder Woman was official).

He came up with five possibilities (one of which is Wonder Woman). 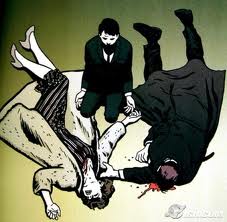 Inspired by that excellent post, I thought I would look at what DC property should become a new live action television program.

My first thought was obviously "Gotham," the tale of a young, pre-Batman Bruce Wayne, training and preparing himself for the life that he would one day lead, much like Smallville was originally.

But, I know that Warner Brothers will never allow this show to actually happen (as a proposed series was actually in the works around the turn of the millennium, but it was shelved due to the importance of the film franchise).  At least not until after the Nolan trilogy is well over. 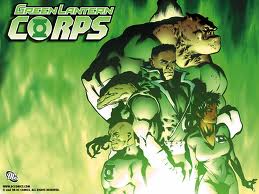 My next thought was huge in scope, and therefore extremely unlike, regardless of how awesome it would be, "The Green Lantern Corps."

The show would be a universe wide take on the adventures of various Green Lanterns.

Probably impossible for the budget of any weekly live-action television show.

Too bad, because it would be epic.

I suppose we'll have to settle for an awesome animated series to tackle that concept.  (And for the record, I would be all about watching such an animated series).

So, what DC property would make the best weekly television show?

I think the best bet would be a slightly obscure character who has a rich and varied past and an intriguing look to go along with big story-line potential.

My choice would be The Question. 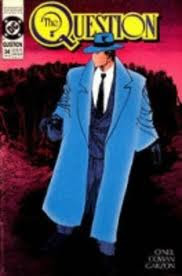 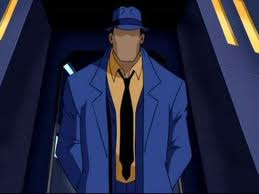 as a conspiracy theorizing detective, and it is in that vein that I would like to see the television series follow.

The character of the Question was the alter-ego of investigative reporter Vic Sage (which was a stage name, his real name being Charles Victor Szasz).

He applied the disguise in order to stop the sale of a dangerous product.  He had to do so under the mask because of his well-known public persona.

After stopping the sale, he kept the alter-ego of the Question sure that it would come in handy in the future.

Personally, I think that The Question is tailor made for a modern television series, and under the right production team it could be a huge hit.

I know I would tune in.

Until Next Time, perhaps all of the troubling news out of the Wonder Woman television show will get straightened out before it airs, and all of our worries will have been for nothing, but if it doesn't, I'll get to work on the pilot for The Question and await a network studio's call.
Posted by Josh Man at 6:46 PM