Even though the episodes lately don't seem to have as much to do with the overall storyline (the upcoming Death of the Doctor), I wouldn't be too sure that that is the case.

This week's episode was again a fantastic character study that seems to be bringing about the prophecy River foretold: the Doctor will fall lower than he ever has before.

Last week the Doctor locked an older, bitter Amy out of the TARDIS (well, had Rory lock her out), one who had lost all faith in him after he failed to save her.

This week, the Doctor forced Amy to lose faith in him (in order to save her, that which she had faith he would do, but still).

Finally, the Doctor having seen a possible future Amy due to his influence on her life and hating what he had made her and seeing someone that could have become a companion dying after he had promised to save her, the Doctor decided it was time for Amy and Rory to stop traveling with him.

It isn't the first time that the Doctor has made the conscious decision to kick someone out of the TARDIS.

Granted most people make the decision to leave on their own.

Or circumstances force the decision, most notably with Donna's situation of having to forget the Doctor in order to live, Rose being in a different reality, and, of course, Adric who died in Earthshock.

But, the Doctor has forced people to leave the TARDIS before.

The first time it was his own granddaughter, Susan Foreman in The Dalek Invasion of Earth. 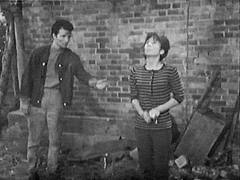 She fell in love with a 22nd Century freedom fighter (against those hated Daleks), but felt that her place was by her grandfather's side.

He realized that she would never live her own life if she remained with him, so after locking the doors to the TARDIS and a tearful farewell, the TARDIS dematerialized without Susan aboard.

She would make another appearance in the special The Five Doctors (no mention was made of the man she left the Doctor for).

The next time the Doctor felt it necessary to leave someone behind was because the Time Lords called him back home, and, at the time, Gallifrey was off limits to humans.  That meant that Sarah Jane had to stay behind. 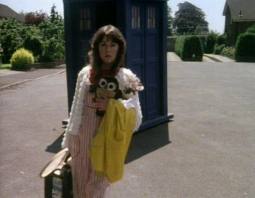 The story was The Hand of Fear, and Sarah Jane wouldn't see the TARDIS again until much, much later, (School Reunion in series 2 of New Who).

Very rarely does the Doctor tell companions that they have to leave, and it is always painful when it happens, even if they always seem to return (like Susan in The Five Doctors and Sarah Jane in School Reunion, The Stolen Earth, and Journey's End plus her own spin-off).

Obviously we haven't seen the end of Amy and Rory, but their time as regulars in the TARDIS might indeed be over.

The other interesting things that seemed to be happening in this episode involved the Doctor himself.

Two episodes ago in Night Terrors, the Doctor got extremely frustrated with a Rubix Cube.

Last night, the Doctor quickly solved a Rubix Cube with very little thought (and without mention).

In the first episode that featured Matt Smith as the titular Time Lord, we learned that this regeneration absolutely hates apples.

Yes, that is Matt Smith as the clown.

There has to be a reason that Matt Smith, the main actor on the show, was put into makeup and costume to play a clown that had no lines.  Easily a role that could have gone to an Extra.  So why is the star of the show playing the part?

It has to mean something.

So does the apple.

So does the Rubix Cube.

At the end of The Night Terrors, the Doctor says, "It's good to have everybody back in the flesh."

This could be significant.  If the Doctor had been facing the camera when he said it, it would be easy to write this line off since the episode was originally supposed to air in the first half of the season (prior to the reveal that Amy was in fact flesh), but since you didn't see the Doctor's face as he said it, any line could have been substituted here and yet the Doctor still talks about "the flesh."

Moffat is clearly up to something, but is it as obvious as the Doctor who dies was the Ganger Doctor?

I suppose we will know in a couple of weeks.

As for episodes this one brings to mind, I already mentioned the two previous stories that had the Doctor leaving behind companions, but the religious aspect brought another episode to mind. 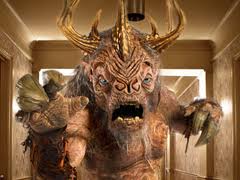 Once again, Doctor Who plays with myths, this time I felt to much better effect.  It played with the religious ideas of Hell, of faith and devotion, and with the old Greek myth of the labyrinth and the minotaur.

Personally, I thought that the mixture worked much better (and in half of the episode time) than the last episodes to look at Hell myths, primarily into the character of Satan: The Impossible Planet and The Satan Pit.

And another thing I've loved about recent Doctor Who are the references to classic Doctor Who, in this case a reference to the last time the Doctor faced a bull-like monster who took energy away from its victims, in the fourth Doctor story The Horns of Nimon. 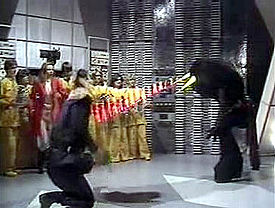 Finally, I loved that the Doctor's room number was 11, nice touch.  I wonder why Amy's was number 7, though.

With some creative counting, you can get to Amy as the seventh companion since the return of the show,

That list would include everyone who spent more than one episode actually traveling in the TARDIS since the return of the show, so it is possible that was the reason for the number.

But more importantly, I want to know who (or what, but the way he reacted made it seem like a who) was in the Doctor's room.

Of course.  Who else? - The Doctor

Was it Susan?  Maybe the parent of Susan, the Doctor's never before referred to child and some dark past there?  Maybe Adric, the one companion the Doctor has truly failed?  Maybe the TARDIS being lost somehow?  Maybe the wife that led to Susan and her parent?  Maybe the astronaut who is going to kill him?  Whoever or whatever, I'd love to see behind that door.

Email ThisBlogThis!Share to TwitterShare to FacebookShare to Pinterest
Labels: Doctor Who, first thoughts, The God Complex