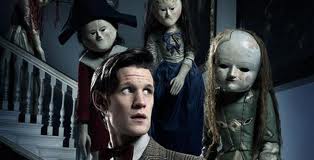 I'll be honest, I was a little annoyed with how obvious it was that Amy and Rory were in a Doll House in the closet , and yet the show seemed to think that it was mysterious.  Everyone I've talked to agreed, they figured that out almost immediately.  Once the Doctor and George's dad got sucked in as well, that ceased to be an issue, and the reveal of George as the actual monster was clever and handled quite well.

It reminded me some, of course, of the Twilight Zone episode where the kid could send people to the corn-field, and I'm sure that episode was an inspiration, but it treated the child and the results and reasons for his ability as very different giving that old tale a new and interesting spin.

Not too much in this episode that relates to the overarching story-line, but sometimes that's okay, especially when the result is such a fun and creepy episode.

It was certainly nice that the dire death-like moment happened to Amy this week instead of to Rory as is so often the case.

This would probably be a good episode to show one of your non Doctor Who watching friends to give them an idea about what the show is without spoiling the overall story-line too much.  Once they are hooked on Matt Smith's portrayal of the Doctor, start them on the Stephen Moffett led ride that is the Matt Smith era!

Until Next Time, next week's episode looks to continue the theme of replacing Rory with Amy as the companion who always has bad things happen to them.
Posted by Josh Man at 12:37 PM