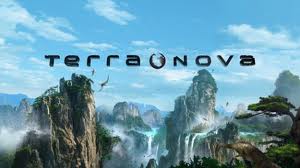 I'm planning on doing a post of pilot reviews as this season seems to be off to a much better start than last season's horribly disappointing result.

But before I get to that post, I have to write about the show that I was really wanting to like and that turned out much better than I really could have hoped for.

I love the high concept idea of the show, a future planet destroyed by humanities refusal to be environmentally conscious, a link to 85 million years in the past providing a one-way trip to redo like and maybe not make the mistakes of your ancestors, and a few mysteries that mean everything in paradise is not quite what it seems.

The Mysteries so far...

The markings found by Sky, known to the Sixers and apparently Taylor, and their connection to Taylor's son and the mysterious "real reason for Terra Nova."

The reasons for the Sixers defection, who sent them to Terra Nova, and why

Why there was a 118 day delay between Taylor's appearance in the past and the arrival of those who followed him.

What happened to Taylor's son, where is he now, what is he up to?

How much of a connection is there between Taylor and the Sixers, because while on the surface their relationship is strictly antagonistic, the way that Mira (the leader of the Sixers) talked about him at the end suggests some sort of working relationship (although that can still be antagonistic, if begrudgingly respectful of the foe).

And, of course, the big one... if the real reason for Terra Nova isn't to "start over," then what is it?  And what does Mira mean by "control the past to control the future" if the past they are in is an alternate timeline?

I for one want to see what the answers to these mysteries are.

All in all, I'm intrigued, far more intrigued after this pilot than I have been after the pilot of any other show since LOST.

Sure, Fringe is all full of mysterious goodness now, but remember, it started off as a pure X-Files rip off and took some time to get to the mythological heavy show that it has become.  Terra Nova got right to the mysterious right off the bat, and I love that.

I also thought that the characters were gripping almost immediately, up to and including Josh (who I like for more than just his awesome name).  I love the tension-connection between Jim (Jason O'Mera who I still miss as Sam Tyler on Life on Mars) and Josh, the fact that they are really similar leading into the problems they have with each other.

I love Maddy, who is a science/math junkie, and is already one of the best written female characters on television.  It is rare to have a clearly smart and nerdy (meant in the best possible way) teenage girl on a television show (Alex Dunphy on Modern Family being the only other recent example that I can think of).  Her awesome interactions with the cute soldier boy were hilarious, and they were made even better by the expressions of her five year old sister, who can already recognize her sister's awkwardness.

The show looked really good, as well, the dinosaurs being far more realistic than even some recent movie dinosaurs that come to mind (yes, King Kong, I'm looking at you).

The effects, the characters, and, of course, the mysteries added up to make this, in my opinion, the best pilot on Network Television since LOST, and I think the show can continue to get even better.

I certainly hope it does at any rate.

Until Next Time, did you watch the show?  What are your thoughts?  And any early theories on any of the mysteries?  (After all, it is never too early to start theorizing).
Posted by Josh Man at 4:56 PM