A Yellow Umbrella and a Blue French Horn: My Spoiler Filled Review of the HIMYM Finale 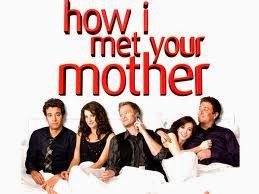 Way back in the beginning of this very blog (although it was hosted at a much different place, and I was very different myself!), a new comedy premiered: How I Met Your Mother.

Usually, sitcoms take some time to find their stride.  That wasn't the case with HIMYM.  The pilot was perfect.  It introduced the five characters that we would fall in love with over the next nine years, and set up a perfect couple that it then took away from us: Ted Mosby and Robin Scherbatsky.  At the end of that pilot, Ted, who is telling his kids the story of how he met their mother, tells his children, "And that's the story of how I met your Aunt Robin."

Through the years, people tried to come up with ways that the mother would somehow actually be Robin, but no, the creators had taken that off the table right at the beginning.

It was kind of brilliant, when you think about it.  The beauty of sexual tension for television is that wanting the couple to get together is so much more enjoyable to watch than the couple actually getting together.

The show, especially in its early years, did an outstanding job of making you want Ted and Robin to get together, and yet we knew it couldn't happen.

There came a time, however, when the show couldn't really play that card anymore, because even sexual tension, the will they won't they (especially when we know that they won't) just can't carry a show anymore.  (Smallville worked with this through Clark and Lana for a long time, but ultimately, they had to bring in Lois.)  You can only keep the couple apart in a "will they or won't they" state for so long before they either do or don't!

HIMYM hit a bit of a lull when they reached that point.

And like Friends before it, the show was in danger of becoming more of a soap opera than the genius comedy that it had been.

Enter the Robin and Barney relationship, which seemed way out of place when it first happened.

I thought for a bit there that the show I loved so much was in danger of losing everything which made it so great.

But then Marshall's dad died.

That moment recharged the show.  (It was also around this time that the show finally was off the year in/year out bubble.  Nearly every year in the beginning, the creators were writing possible series finales, which incidentally would have ended in much the same way that the show would ultimately end.  Now, however, they knew they were going to be able to end on their own terms)  With the death of Marshall's dad, the show pointed itself towards its end, and in my opinion has been  phenomenal ever since.

The one thing that annoyed me was that the show still wouldn't give up on Robin and Ted even though it was obvious that they weren't going to end up together.

Even though we still didn't know who the mother was, there was no way it was Robin, and we had enough clues to let us know that she was going to be perfect for him (much as Robin, in many ways, was, although Robin had a lot of issues to work through to get her there.  Robin's parents really messed her up.)

Plus, as much as I didn't like the idea of Robin and Barney at first, I thought that there actually was something there, and continuing to hint at the lingering feelings between Ted and Robin just weakened the Barney and Robin relationship!

In fact, it pointed out to me all the reasons that Barney and Robin would really never work.

If the show wanted me to buy Robin and Barney together, the show needed to quit with the underlying Ted and Robin stuff!

But they never did, and finally as the last season was in process, I understood why.

No Robin wasn't the mother, but everyone who wanted them to be together after their perfect first date and the awesome moment of Ted stealing the Blue French Horn, were ultimately going to get their wish. 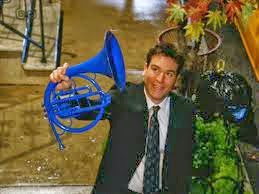 We started to get clues that the mother wasn't long for the world a month or so ago.  They were celebrating a weekend together away from the kids at the hotel and retelling stories that each had heard way too many times, when Ted tells the story of Robin's mom showing up for the wedding.

He says, "What kind of mother wouldn't be there for her daughter's wedding?"  Then he and the mother both tear up (Ted a little more, of course, he's "a certain delicate flower" as Marshall would later describe himself to Ted in the finale).  Immediately it became clear that the mother was sick, probably dying.

Why is Ted telling this story?  That part never really made sense.  Unless, of course, the mother was gone and had been for a while.

He said he was telling the kids a story about how he met their mother, but that was never what he was actually telling a story about.

Yes, Ted loved their mother.  It was a great love at first sight story that almost seemed like destiny, keeping them apart until the moment that they could actually be together.  But that wasn't really the story that he was telling.

It was in there, for sure, but only as support for the story that he was really telling.

The story about the other great love of his life, the one that seemed to get away.

The kids understood.  The story was really about the fact that no matter how great their mother was, and how perfect their time together had been, Ted was in love with Robin.

And Robin was in love with Ted.

And even though it seemed like any chance of Ted and Robin ending up together was past, it is never too late for true love.

The story, from the beginning, was about Ted and Robin.  It just took them a really long time to realize it.

Ted needed to meet the mother and have kids.  That was something Ted needed that Robin couldn't provide him.

Robin needed to have an amazing career and prove to herself that she was a capable person that could survive without someone else.  She'd always said it, but I don't think she believed it until she realized that she and Barney wouldn't work, and that life on her own really would be a fulfilling one.  She didn't need a man or kids to fulfill her dreams.  And traveling the world, becoming the face of World Wide News, was something that she couldn't have done if she was with Ted.

Ted and Robin, in order to live the lives they wanted, couldn't live them together when they were pursuing those dreams.

At the same time, they were in love with one another, and they never stopped loving one another.  And once they had each achieved their dreams, Robin's face on a bus and Ted's Yellow Umbrella, 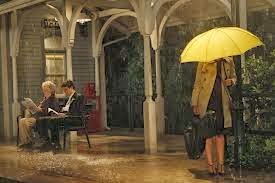 it was time for the two of them to finally realize what we all saw way back in the beginning.  And there was really only one way that Ted could let Robin know he was ready.

By stealing a blue french horn.

From the beginning, the show knew how it would end.

It wasn't a story about the mother.  She was barely in it.

Until Next Time, there is a large hole in my heart where a perfect television show used to be.  Thank you, How I Met Your Mother.  Thank you for everything.