Pilot Reviews: Free Agents and Up All Night

One year, I actually reviewed every new pilot on the network schedule.

Coincidentally, that year was also the year of the writer's strike.

I maintain that my reviewing the pilots had nothing to do with the writer's strike...

But to be safe, I'm not going to review every new series this time, just a bunch of them...

Starting with a couple of the new NBC Comedies

I love Hank Azaria (best known for voice work on The Simpsons).  I love Anthony Stewart Head (best known as Giles on Buffy the Vampire Slayer, also known for a series of coffee commercials in the nineties, if you know them, then you know what I'm talking about).

As for this show, right now the strength of Azaria and Anthony Stewart Head plus the outstanding interplay between Azaria's character and the main female character (played by Kathryn Hahn who you might recognize from Anchorman or The Goods).  When the pilot opens, Alex (Azria) and Helen (Hahn) have just had sex.  Alex just got a divorce and Helen's fiance died a year ago.  Neither are ready to move on, and to make matters worse, they work together.

I like the supporting characters potential, although only Emma (played by Natasha Leggero) is already reaching that potential.  Her "ice queen" administrative assistant is hilarious in the pilot (and in the second episode is given a little more depth cementing her as my favorite character in the show so far).  As for most of the other supporting characters, they seem more like caricatures right now than characters, and that includes Anthony Stewart Head (although he is hilarious).

I would like to see more depth in the characters, even in the main characters.

But there is certainly potential in the show, although it certainly hasn't reached it as of yet.

Interesting fact:  This is based on a UK television show of the same name, which also had Anthony Stewart Head in the same role. 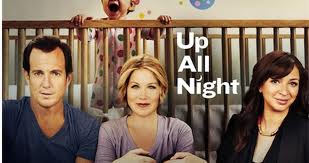 From Lorne Michaels, he who gave us (and gives us) Saturday Night Live, comes a comedy for two SNL cast members, Will Arnett and Maya Rudolph.  Headlining the comedy is Christiana Applegate, returning to tv after the two season run on Samantha Who? but still best known for her work on Married: With Children.

Chris (Arnett) and Reagan (Applegate) are a young, fun married couple whose life abruptly changes when Reagan discovers that she is pregnant.

I was immediately turned off when it seemed like Chris and Reagan were not at all excited about this development, but the show fast-forwards to a few weeks after Chris and Reagan have come home with their new baby, and they are clearly very dedicated to the new addition to their family.

Reagan is a producer for a Ellen/Oprah type television show starring Ava (played by Maya Rudolph) and Chris had been a lawyer, but while Reagan is returning to work, Chris has made the decision to become a stay-at-home dad.

Their life has clearly changed, and they are dealing with those changes to the best of their ability, but they are clearly loving parents and dedicated to Amy, their child, so my early worries were quickly answered.

It was a fun first episode as they re-entered the world after having the baby, but the pilot didn't really tell me what the show itself would become.

Having also seen the second episode now, I have a better idea of what the show might become and think that it will continue to be worth watching, if not "Must See TV" as NBC used to bill their comedies.

But, this post is about grading the Pilots so...

Interesting Fact: Emily Spivey who created this show not only used to be a writing supervisor for Saturday Night Live, but also was a Story Editor for King of the Hill.

For my review of Whitney and New Girl go here...

For my review of 2 Broke Girls and How to Be a Gentleman go here...

For my review of Pan Am and Prime Suspect go here...

(My thoughts after Terra Nova, although not a proper Pilot Review, is here...)
Posted by Josh Man at 10:31 PM