First off, what are the chances we can get Craig as a full time companion?  He was fantastic, and this episode showed off the comedic talents of James Corden (who returned as Craig from The Lodger) much better than the episode last season which focused more on the Doctor than it did the flat mate.

This time, while the story was ostensibly about some rogue Cybermen trying to re-constitute themselves and then take over the world (YOU WILL BE LIKE US!), but actually, it looked at the idea that's been thrown out these last few weeks indicating that the Doctor was a selfish bastard and that his companions (partners) were worse off for being with him.  And it looked at that idea from the opposite side, that the Doctor needs his companions (partners) both to save the day and to remind him of why it is all important. 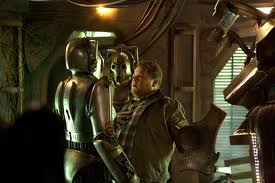 Craig argues that the Doctor needs others, and the Doctor certainly needed Craig.

And Craig needed the Doctor.

Not to save him from the Cybermen, because actually Craig does that himself.

But to realize that he can be a good father, that he has that in himself, and he did have it in himself.

Craig is nearly killed by a cybermat 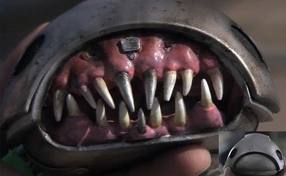 who, by the way look way scarier than they did in classic who...


but Craig is more concerned about what the Doctor did with Stormageddon (which is by far the coolest self given nickname ever...) than with the creepy thing that nearly killed him.

And while he was nearly turned into the Cyberleader, his concern for Stormageddon allowed him to not only break free of the Cyberman-making process, but also infused their ship with that dreaded thing known as emotion (which is a way better weakness for the Cybermen here in the new series than Gold was in the old). 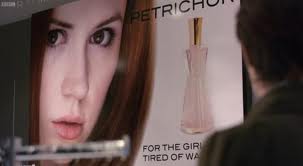 Craig gives us the argument that the Doctor needs his companions, and while the ending might not have been as happy for Rose or Donna, we see that Amy and Rory's life seems to be going quite well since they left the Doctor.

And after Craig and the Doctor defeat the Cybermen, the Doctor finally heads off towards the end he knows is coming (and gets the Stetson from Craig!)

I'm going to be honest, I have no idea how Moffat will get out of this one, but I'd guess the title has something to do with it...

The Wedding of River Song

I think that it will be epic, but as to exactly what will occur?

Your guess is as good as mine.

Episodes this reminded me off (besides The Lodger) were old Cybermen episodes such as The Tomb of the Cybermen, a 2nd Doctor story that introduced the Cybermats and Revenge of the Cybermen, the last story of the first Tom Baker (4th Doctor) season, which also featured Cybermats (and Cybermats attacking companions or partners, in this case, Sarah Jane Smith).

Until Next Time, I'm sure that the finale will give us a lot to talk about.  See you next week.
Posted by Josh Man at 5:47 PM