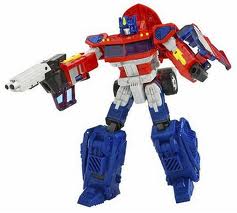 While many people I know, and sadly many of readers as well, will probably be out this weekend furthering the career of my least favorite director of all time, I will be avoiding the movie theater (at least where Transformers 3 is concerned) so that when Transformers 4 is announced absolutely no blame can be placed on me.

Seeing as though I was a huge fan of the original cartoon, and as a child when the animated movie was released, not only did I see it in theaters, but (SPOILER ALERT) I cried when Optimist Prime died!  Literally cried.  It was all any of us could talk about when school resumed that fall.

I am the primary audience for this type of film, and yet the horrendous job done by Michael Bay previously has made me swear off the franchise until it is in more capable hands.

Seeing as though I have a responsibility, however, to review big films, I feel that I need something posted to mark the occasion of this inevitable trashing of my childhood.

To that, therefore, I offer a new Archive Files, wherein I will repost my most negative review ever (still not as artfully negative as Ebert's review of Battle: Los Angeles, but he's been doing this a lot longer than I have), my review of Transformers 2, the worst movie I have seen in my entire life...


Transformers 2, Less Than Meets the Eye

Growing up, along with Voltron, my favorite cartoon was Transformers.  When the reigns for the inevitable film were handed to Michael Bay, I was worried.  First off, I knew that there would be little chance to have a clue on what was happening in any fight scene due to the camera shaking as if it were being pummeled rather then just trying to document robots pummeling each other.  On that count I was most certainly correct, but overall the first Transformers film was actually enjoyable and it was cool to see the robots I had loved so much as a kid so awesomely recreated on the big screen.

Well, while the first time out he got it mostly right, Michael Bay seemed to prove all the original naysayers right with his second go round.

I really didn't think that I would see a film this year that I disliked more then Terminator, but lo and behold, just a few weeks later, I did.

Transformers 2 is without a doubt one of the worst films ever made.

Look, obviously it isn't supposed to be an Oscar contender, and really it is a film that is probably meant to be enjoyed more by kids then adults.  I understand that.  But it isn't too much to ask a popcorn movie to be, I don't know, enjoyable.  This film is anything but.

Michael Bay makes every fight scene pretty much impossible to comprehend as it is nearly impossible to tell which robots are fighting, much less what they are doing to one another, and really, the giant fighting robots was about all this film really could have hoped to have going for it.

As for everything else, it is really just embarrassing.  There is a somewhat cool idea for a movie hidden amongst all of the extremely juvenile humor, but it is overshadowed and made pretty much moot by the majority of the film.

In just the first thirty minutes we are treated to two dogs having repeated sex in various places and the wonderful comedy cliche of the clueless mother getting stoned unintentionally on pot brownies.  What is funny on an episode of That 70's Show probably doesn't belong in a supposed blockbuster summer action movie.

Throughout the film we are also treated to a giant robot's testicles (seriously) and a tiny robot humping Megan Fox's leg for well over a minute.  I would think that perhaps this film was meant for the 8 year old boy market if not for the fact that it is a hard PG-13.  There are almost as many cuss words in this movie as there are in The Hangover (although Transformers 2 does avoid the F-bomb.  Good for it, I guess?)

Personally, I don't understand how any actress could agree to be in a Michael Bay movie as he is up to his usual misogyny in this film.  Not only are all of the females given short shift, like the poor mother of Shia LaBouf's character, but they are generally treated like objects.  Megan Fox is pretty much only around to look sexy.  (Not that she isn't very good at it, because she is).  But this film even goes so far to blatantly make the comparison of hot co-ed = evil robot.  Literally.

The worst transgression, however, and the one that you are likely to hear the most about is the unbelievably racist stereotypes played out by the Twins, two Autobots that are portrayed as black youth and voiced in tacky hip-hop-esque dialogue.  There sole purpose in the film is to beat each other up and call each other derogatory names for female genitalia.  Also each of them are given a gold tooth and a joke is made at their expense pointing out the fact that they are illiterate.  It is embarrassing and honestly made the movie a painful experience.  There was literally no reason for these characters to exist other then the supposed "comic relief" that they were meant to provide.

And to top it off, Michael Bay actually includes an homage... TO HIMSELF!  Unbelievable.

This movie is not worth your time and definitely not deserving of your money.  Please do yourself a favor and miss it.


Until Next Time, the last line of this review probably encapsulates exactly what I would think of the third installment.  STOP DESTROYING MY CHILDHOOD, MICHAEL BAY! (And learn some respect for women while you're at it)