SPOILERS (if you haven't watched through episode 6 of season 6, and yes, we know, those of you in the UK have already seen episode 7.) 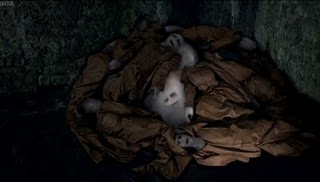 This was a great second-parter leading into the mid-season finale, where apparently, we will finally find out the truth about River Song, (my theory being that she is the daughter of Amy and Rory and subsequently the mother of the little Time-Lord we saw in Impossible Astronaut/Day of the Moon, whether that is correct or not we shall soon know).

The beginning was fantastic as the ganger Doctor adjusted to all of his previous incarnations.

"One day we will get back, yes, one day."  The First Doctor and his desire to return home.

"Reverse the polarity of the neutron flow."  The Third Doctor's famous saying.

Then, the Doctor (ganger version) seems obsessed with Cyber-Mats.  Seems like an odd choice, but perhaps the ganger version of the Doctor has some idea about what's to come.

After he gets himself situated, we are treated to some fun multiple Doctor stuff, last seen in the end of Season 4. 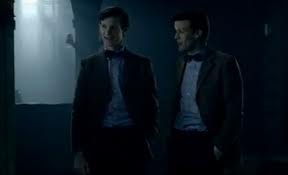 I really enjoyed seeing Matt Smith work with Matt Smith as the Doctors each finished the other's sentences and immediately began working towards a shared goal, part of which was come to verbally, saving as many of both the humans and gangers as possible (it turned out to be an exact equal number of each, although far more of each were lost in the end than saved), and part of which was kept silent, convincing themselves of the difference between flesh and human and in particular Amy's ability to tell the difference. 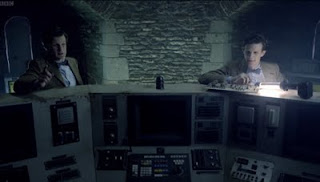 That, of course, was because, as I surmised after the last episode, the Doctor's reason for coming here at all was to test a theory that he had concerning Amy and her maybe/maybe not pregnancy.

It turns out that Amy herself is made of flesh, and while her ganger is not pregnant, the real Amy situated in a small pregnancy bed and presumably hooked up to a harness similar to the ones the humans at this factory used prior to their gangers gaining sentience.

Therefore, the creepy one-eyed lady Amy kept seeing was from her human situation bleeding into her awareness in the ganger.

Pretty shocking end and answer to that particular question, setting up the sure to be heart-stopping finale. 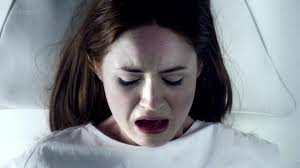 Meanwhile, another big question might have been provided an answer as well.

The ganger Doctor was in every way the Doctor.

The flesh were used by the factory workers because of the dangerous environment in which they worked.  When they lost one of the gangers due to the acid, they just had the flesh make them a new ganger.

At least, that is one possibility.

Until Next Time, I can't wait to find out the truth of River Song, because I'm sure that will only be the beginning.
Posted by Josh Man at 9:20 PM

Email ThisBlogThis!Share to TwitterShare to FacebookShare to Pinterest
Labels: Doctor Who, first thoughts, The Almost People