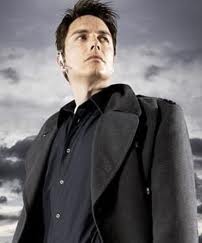 Tonight brings us the premiere of the fourth series of Torchwood.

Titled Miracle Day, the fourth season of Torchwood is about the earth having first one day where absolutely no one dies; then another; then another, until the fact that no one can die leads to a multitude of problems.

It is a co-production between the BBC (who solely produced the first three seasons) and the American cable network Starz.

Not to worry, however, Russell T. Davies, the creator of this Doctor Who spinoff (and former Doctor Who showrunner who rebooted the show so successfully six years ago), is still the man in charge of the new season.  The first three seasons are available on Netflix Instant, so do yourself a favor and get caught up quickly!

This season looks to be pretty fantastic, adding Mekhi Phifer, Bill Pullman, and Lauren Ambrose  to the surviving cast from the first three seasons.

Monday brings us the third season of Warehouse 13 and the long awaited second half of the fourth season of Eureka.

Warehouse 13 is a goofy little show that might be more fantasy than science fiction, but it grows on you quickly, and the characters are fantastic making the sometimes absurd storylines intriguing and well worth investing in.  Aaron Ashmore joins the cast this season as an agent who is a human lie detector.  Hopefully Mika will be back as well sooner rather than later and H.G. Wells as well (who by the way is a woman...)

Eureka is probably the finest sci-fi show currently on the air, and the second half of the fourth season brings back Wil Weaton as Dr. Parrish and introduces Felicia Day to the cast as well!  I can't wait to see some more repercussions from the altered timeline.  The first three seasons of Eureka are available on Netflix instant streaming and the first half of season 4 just came out on DVD and BluRay.

I'm very excited about each of these shows, as well as loving what Falling Skies has been giving us so far.  While the network television was certainly down this past year, the summer series seem to be delivering quite nicely.

Until Next Time, I hope you have a chance to catch some Summer television!  Enjoy it, I know I will.
Posted by Josh Man at 3:52 PM