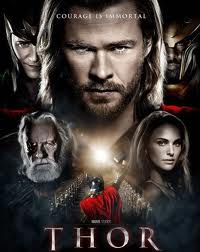 Marvel has done it again.

Along with Iron Man, Marvel Productions has proven that a hero doesn't have to be well known in order to be successful, because I guarentee you this movie will be successful.

The hero just needs to be in a fantastic film.

Like in Iron Man before it (and following in the footsteps of Sam Raimi's Spider-Man and Christopher Nolan's Batman), the characters and the story matters.

This isn't a Michael Bay film tied together from Special Effect to Special Effect.  The plot and characters are well thought out and superbly drawn.

Part of what I wondered about Iron Man before it came out was how the character of Tony Stark would be received by a movie going audience.

Robert Downey Jr. portrays those traits while at the same time walking a fine line (that is more difficult than he makes it appear) keeping the character extremely likable despite his faults.

In Chris Hemsworth, Marvel has again found a perfect actor for a part.  Hemsworth (basically an unknown before Joss Whedon helped him land this role, and Hemsworth has paid him back by getting Cabin in the Woods released due to his sudden popularity) is able to make the arrogant, all powerful Norse God Thor completely charming and likable without losing the arrogance and power.  Like Downey Jr., it is an amazing performance, but where we might have expected it from Downey Jr., it is an incredible surprise from Hemsworth.  He has quite a future ahead of him.  He can flat act.

Everyone else in the film is spot on as well.

And as we should have expected, Brannagh's direction is flawless.

The visuals are amazing, and the 3D incredibly natural.

A friend pointed out that there are a few cliched moments in the story, but they didn't bother me at all, perhaps because they felt more archetypal to me rather than cliched.  After all, Thor is quite an archetypal character.  I will just say that I feel like the moments work.

Like Iron Man, this is a film first, a comic book movie second (something that is harder to achieve than you might think, Iron Man 2 did not achieve the same success, it was a wonderful Comic Book movie, but not a great film).

If Marvel continues to focus on story and character, while also remaining able to pander to the hardcore comic book fans, things are only going to get better as this world (nay, this universe) continues to come together.

Until Next Time, it is clear that my Top Ten Comic Book Super Hero Movies of All Time list has a new occupant.
Posted by Josh Man at 3:34 AM