Some More on Sarah Jane 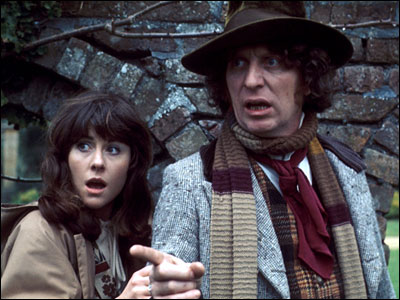 I am still feeling shock and sadness at the passing of Lis Sladen.  There have been quite a few tributes in the past day that really get to the loss many of us are feeling.

I realized as I thought about why this has hit me so hard that Sarah Jane Smith has been a part of my life practically my entire life.

I first was introduced to Doctor Who by watching random Tom Baker episodes on PBS (usually completely out of order, which meant the greater stories the episodes were a part of were completely lost on me, but it was fun and slightly scary so it didn't bother me too much that I never really knew exactly what was going on), and on many of those episodes, Sarah Jane was the companion.

A plucky reporter, that despite being human and (gasp!) female, often showed the same bravery and abilities as the Doctor himself, Sarah Jane was a strong character that stayed with me throughout my life after the Doctor and I lost touch (or PBS stopped showing episodes).

When Doctor Who returned in 2005, I was very excited, but didn't have BBC America, and therefore was late getting back to the party.  I always meant to, but it took Netflix putting all of the first four seasons for me to get caught up in time for season 5.

However, a couple of years after the return, Russell T. Davies started a spin-off series featuring my favorite companion, Sarah Jane Smith.  The first season of The Sarah Jane Adventures actually aired on SciFi (now known as SyFy), and that was a channel that I had.

I actually watched The Sarah Jane Adventures before I watched any NuWho.

It was as if she had never left my television screen.

Three of the still living Doctors who have had Sarah Jane as a companion, Tom Baker, David Tennant, and Matt Smith, have paid tribute.

Sarah Jane dead?  No, impossible!  Impossible.  Only last week I agreed to do six new audio adventures with her for Big Finish .

She can't be dead.  But she is: she died yesterday morning.  .  I had no idea she was ill; she was so private, never wanted any fuss, and now, gone.  A terrible blow to her friends and a shattering blow for all those fans of the programme whose lives were touched every Saturday evening by her lovely heroic character, Sarah-Jane Smith.

Happy memories with Lis.  Here we were having fun during a filming break.
Picture © James Clevett

Lis Sladen was very important to me, you know. When I joined the little world of Doctor Who, Lis was already a star.  She had an enormous success with Jon Pertwee.  She was good pals with the Brigadier, our beloved Nicholas Courtney; she knew all the regular directors.  She was adored by Barry Letts, the producer who cast her in the role.  She always said she was Barry's girl.  It was for that reason she decided to leave the show.  But it was not necessary at all.  The fans adored her, Philip Hinchcliffe, our new and glamorous producer, adored her, so did David Maloney, her favourite director.


Terry Walsh, the regular stunt man adored her.  Once in deep, dark Wooky Hole caves Lis was almost swept away in a small boat, fifty feet from a terrifying black hole that looked like the entrance to hell.  In a flash Terry Walsh dived in and caught the boat and all was well, thanks to the devotion of Terry.  Lis was safe and and the show could go on.

Here we are on Bessie right at the beginning of my time on Doctor Who.
Picture courtesy of the BBC

So when I replaced Jon Pertwee, it must have been an anxious time for Lis; it was a very anxious time for me.  Following in the big footsteps of Jon was daunting.  Tom Baker?  Never heard of him.  And so we started on the first story under Barry Letts as director.  We did the location stuff first and I just obeyed orders; running about, with the Brigadier and that silly Bessie Trotwood, I think it was called: too small for me, but also in its own way a "character". Jon loved cars.
But back in the rehearsal room things were quieter and there was time to put in little details, time for Lis and me to get acquainted, time for me to try and make a little mark, so to speak.  And Lis laughed at my silly antics; yes, she did, she laughed me to success.  We both came from Liverpool, that small detail helped.  We both loved old movies.  And quite suddenly Lis and Ian Marter and Tom Baker were a trio.  It is so consoling when one is sad and bereft to remember the good times, the laughter, the glamour; yes, the glamour: we three switched on the lights at Blackpool!   A very great honour.  We performed a little melodrama directed by (guess who?) yes, David Maloney! And now Lis was adored by Ian Marter and Tom Baker too.

Switching on the Blackpool illuminations.  Picture © Blackpool Council
And it never ceased. And in the evenings Lis, would simply disappear back to wherever we were staying and the rest of us would often be raucous!   And too soon she decided to leave; no fuss at all, all was calm.  And Philip Hinchcliffe gave her lovely farewell party at the Hilton.   Those sweet memories of happy days with Lis Sladen, the lovely, witty, kind and so talented Lis Sladen.  I am consoled by the memories.  I was there, I knew her, she was good to me and I shall always be grateful, and I shall miss her. 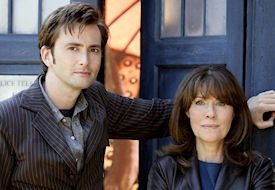 I just can't believe that Lis is gone. She seemed invincible. The same woman who enchanted my childhood, enchanted my time on Doctor Who and enchanted generations who have watched her and fallen in love with her – just like I did. I feel very honoured to have shared a TARDIS with Sarah Jane Smith, and I feel very lucky to have shared some time with Lis Sladen. She was extraordinary. 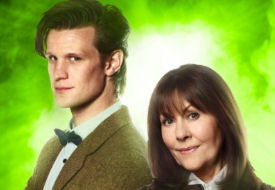 What struck me about Lis was her grace. She welcomed me, educated me, and delighted me with her tales and adventures on Doctor Who. And she also seemed to have a quality of youth that not many people retain as they go through life. Her grace and kindness will stay with me because she had such qualities in abundance and shared them freely. I will miss her, as will the world of Doctor Who and all the Doctors that had the good pleasure to work with Lis Sladen and travel the universe with Sarah Jane.

Finally, in closing, it seems appropriate to show Sarah Jane's farewell scene from Doctor Who.  She asks the Doctor not to forget her, small chance any of us could.  She also says she will say hello to the Brigadier, which is a wonderful moment, considering that the Doctor Who universe just lost him as well.

Farewell Sarah Jane Smith, farewell Lis Sladen, thank you for all you have given us.