Before Its Time: Mercy 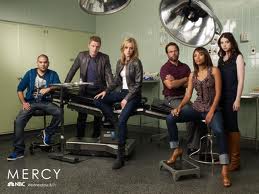 Last year, Mercy came in third in the 6th Annual Josh's Choice for Best New Show of the Season, and upon further reflection, I'm not sure that I don't actually like its finished product better than the finished product of the  the second show on that list FlashForward.

Here is what I wrote about Mercy in that post...

Such a good show, I really hope it returns, although I'm doubting it.  I don't know why more people didn't give this show a better chance.  Some people complained that it was a little too reliant on the emotional stuff, but it did the emotional really well, and unlike another super soapy medical drama (looking at you Grey's) the characters are smart and believable and so are the situations that they find themselves in.  I'm much more willing to buy into the dramatic and emotional stuff when I can believe and connect to the characters, and I definitely can with Mercy.  I never could with Grey's and that is why this, in my opinion, is the far superior show.  Sadly, the ratings follow Grey's Anatomy.

Every episode of Mercy is now available on Netflix instant viewing, so if you are a fan of medical dramas and you haven't checked it out yet, perhaps you should.

The characters are very original, which is helpful in a genre that is so overdone.

Like Nurse Jackie and HathoRNe before it, this show takes the medical drama through the eyes of the nurses, particularly three of them.

Veronica is ostensibly the main character, and she is your typical head strong nurse who feels she knows more than the doctors she is supposedly under.  However, she has reason.  She has just returned from serving a couple of tours in Iraq, where she has seen and learned things that doctors in the hospital couldn't know.  Of course, she has returned with more than just knowledge; she also has Post Traumatic Stress Disorder, and the show deals with that throughout the fantastic one season.

Chloe (and how is this for a nurse's last name) Payne is played superbly by Buffy the Vampire Slayer alum Michelle Trachtenberg.  At first she appears to be simply the prototypical new nurse that graduated at the top of her class but finds the real world is a much different place than the classroom.  However, her character grows quickly and realistically into one of the strongest characters on the show, and often serves as the voice of reason as well as the heart of the series, not to imply that she doesn't have her own difficult decisions to make (and she doesn't always make them in exactly the correct way, either).

Sonia is the beautiful and fashionable one, your typical shallow sorority girl type, but as the series develops that doesn't hold.  In fact, her main storyline throughout the season might be the deepest and most interesting.

It is also unquestionably a soap.  Veronica returns from Iraq having cheated on her husband with a doctor in Iraq and has perhaps fallen in love with that doctor.  Upon returning home she is unsure whether to try and save the relationship or not (despite the fact that Mike, her husband, has no clue about her infidelity).  That decision is complicated when it turns out the doctor that she had an affair with in Iraq has gotten a transfer to Mercy hospital in order to be near her.

But, like I said in the JCFBNSOTS post, the drama comes from believable situations and believable characters.  My problem with Grey's Anatomy is that far too often, it is through the characters' own stupidity that the drama arises.  It makes it hard to be invested in the outcome when the problem could have been so easily avoided.  That is never the case in Mercy.

Sadly, the show never got the audience that NBC hoped it would, and the show was canceled after just one terrific season.

Until Next Time, check this fantastic show out on Netfllix.
Posted by Josh Man at 3:16 PM

Email ThisBlogThis!Share to TwitterShare to FacebookShare to Pinterest
Labels: Before Its Time, Mercy, thoughts, tv