As River Song would say,

IF you haven't watched the episode yet, perhaps now is not the time to read this post.  It is written with the understanding that you have already seen the episode.

And there really is no other place we can start other than where the episode really got going...

With the death of the Doctor 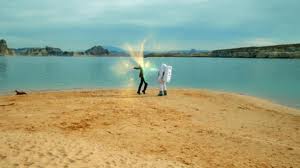 When it was announced that one of the main four characters would die in the opening, speculation seemed to center on River and Rory.

I believed all along that it would be the Doctor.

My theory was that we would see where the Matt Smith incarnation of the Doctor would die.  Meaning when Matt Smith finally left the role, it would come back to this.

Rory died last year (brought back first as an Auton and later thanks to the rebooting of the universe courtesy of an exploding TARDIS), so I didn't think it would be him.

And we all know when River dies, as it happened in Series 4 way back when we and the Doctor first met her.  (Silence in the Library and Forest of the Dead, and I'm wondering now if the title of the first episode was a little more significant than we realized.)  More on that in a little bit.

Obviously Amy is safe, so clearly that left the Doctor. 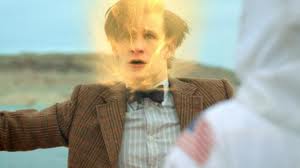 And the Doctor it was. But he is killed again right in the middle of his regeneration cycle, meaning he doesn't regenerate and is dead for real.

Ignoring for the moment what an inconvenient loophole that is for Time Lords, I find it hard to believe that this is really the end for the Doctor.

As Amy pointed out, "Time can be rewritten," and that seems to be an important theme in Moffat's work.

Hell, the Christmas Special this year was primarily based on that idea.  (And I'm loving that it is on as I'm writing this.  Thank you BBC America.)

Then there is the fact that the Doctor went to this death quite willingly, admonishing Amy, Rory, and River to let it happen.

Admittedly, that sounds a little final, so maybe the Doctor even believes this is for real; that he has to actually die, but time, as we all know is quite wibbly-wobbly, and there is more to this than that of which we are aware.

Therefore, the question is raised, how will they get around this?  I have a feeling that that is what the majority of the first half season arc will be about.

The other question raised by the frantic opening, is what exactly the Doctor was hoping to accomplish with his frenetic running around attracting the notice of Amelia Pond throughout history (and remaining oblivious to Rory even as the Doctor in a cool fez waved to him from the middle of the Abbot and Costello movie)?  Clearly the Doctor was up to something with all of that running faster than he's ever run before.

Just before the Doctor is killed, we discover that this Doctor (the Stetson wearing Doctor, Stetson's are cool) is actually two hundred years older than our Doctor, and after we see his death, we find out that our Doctor is blissfully unaware of the future that supposedly awaits him, giving Amy, Rory, and River knowledge that he doesn't have.  Knowledge that will apparently set in motion the death the of the Doctor, but presumably save the world as well.

Having a Doctor from 200 years further in the future set up an exciting moment, for the first time ever in our sight, and probably the only time in their relationship, the Doctor and River each know all about their relationship, whatever exactly it is.

Later in the episode, River opens up a little bit to Rory about how difficult their relationship is.  When River first met the Doctor, he knew everything about her although she had never seen him before.  When the Doctor first met River (in Silence in the Library/Forest of the Dead) she knew everything about him (including his true name) even though he had never seen her before.  They've been traveling in opposite directions the entire time, except for this brief moment.  The end of the Doctor's life (although still before the end of River's), so he has already met the River who had never met him.  He and River, for the only time ever, are approximately in the same place as far as their relationship is concerned.  Too bad it doesn't last very long, and a few remembrances of Easter Island and Jim the Fish are all that we get to see because their are bigger fish to fry or dams to build, since that apparently is what Jim the Fish is doing.  (I apologize for the fish fry pun.)  It is a great moment, made even more poignant when River talks to Rory about the difficulty of traveling in different directions.

"The trouble is, it's all back to front.  My past is his future.  We're traveling in opposite directions.  Every time we meet, I know him more; he knows me less.  I live for the days I see him.  But I know that every time I do, he'll be one step further away.  The day's coming when I'll look into that man's eyes... my Doctor, and he won't have the faintest idea who I am.  And I think it's going to kill me."

Which, of course, in a way it does.

River Song is a fantastic character, Alex Kingston plays her masterfully, as that monologue was expertly given, and I love how we are riding along with the Doctor in this relationship, learning a little bit more about River with each meeting, knowing some things about her future that she does not, but recognizing that she knows a lot more about the Doctor's future than he does, and that we really still don't know who she is at all.

Now, of course, Amy and Rory know some things about the Doctor's future of which he is unaware as well, and that sort of shakes up the dynamics inside the TARDIS a little bit, Amy and Rory having such important information that the Doctor isn't privy to.

Not sure how long that will play out, especially since the episode ends with Amy trying to kill the little girl/impossible astronaut.  I'm pretty sure the Doctor won't let that attempt go without an explanation.

Right before then, Amy announces she's pregnant.  But she seems to give it a lot more import than just a normal announcement of impending birth, as if there is something sinister about this pregnancy.  She tells the Doctor that this is information that can't wait, which gives it a lot of import considering everything that is going on at the time, including her knowledge of the Doctor's impending death.

Why do you think that is?

Here's an interesting thought, considering that Amy's last name is Pond, a body of water, what if River (also water related, hmmm) is actually the daughter of Amy Pond?

I don't know.  Seems plausible though, doesn't it?  There is clearly something hugely (no pun intended this time) important about the baby in Amy's belly.

I think that the reason she felt she had to tell the Doctor about being pregnant is because the Silence in the bathroom told her to.  "You must tell the Doctor what he needs to know and what he must not know."  Obviously what he must not know is about his impending death, and apparently what he needs to know is about her pregnancy.  Since the Silence is somehow controlling Amy, making her tell him, that could explain the urgency with which she tells him at such an inopportune time. 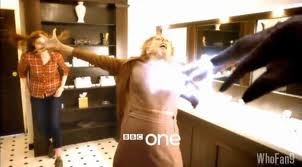 Speaking of, what were your thoughts on the Silence?

An enemy that you forget as soon as you stop looking at them are pretty intriguing.

At least they suit up.  They are classy if deadly, scary aliens. 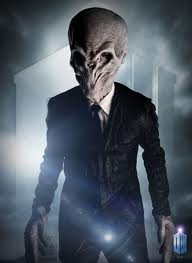 Last season, we were warned that "The Silence Would Fall."

We still aren't exactly aware of what that might mean, but its possible that silence already has fallen, but since you are only aware of the aliens while you see them, most of the time we forget completely that these aliens are everywhere.

Much like the tunnels behind the warehouse our fearsome fivesome (with the outstanding addition of Mark Sheppard, who played Badger on Firefly, Romo Lampkin on BSG, and has also been in The X-Files, Star Trek: Voyager, Dollhouse, Chuck, and Supernatural, in other words, pretty much every awesome sci-fi thing ever) arrive at towards the end of the episode.

Which, of course, brings us to the interesting discover that Rory and River make down there. 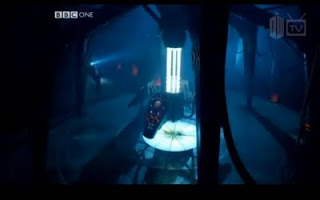 It appears to be the same TARDIS room featured in last season's episode The Lodger.

This is what I'm really loving about Moffat's tenure on the show so far.  Everything matters.  The title of the very first River Song episode seems to play into what's happening now, almost three years later.  What seemed to be an episode outside of the greater arc last year apparently has everything to do with the arc this year.  Every little thing matters.

With that in mind, I figure that at the end of each of these first thought posts I'll suggest an episode (or three) that is worth a closer rewatch based on what we just saw.

Clearly, for this episode, that is The Lodger, but the first two River Song episodes, Silence of the Library and Forest of the Dead, might be worth a gander as well.  You can't really go wrong with those outstanding episodes anyway.

Until Next Time, the series is off to quite a breathtaking start, and I can't believe it will be a week  before we find out what happens next.  Remember, Look Behind You!
Posted by Josh Man at 9:16 PM