More Pilot Reviews (although I promise I am not doing every new show this year). 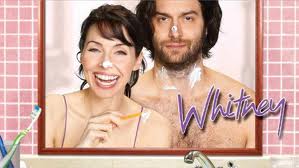 Whitney Cummings, a comedienne, has two shows she created on television this season.  This one, she also stars in as the title character.

While Whitney herself is pretty funny, she is not (as of yet) a very accomplished actress.

Of course, neither was Jerry when Seinfeld started, and neither was Larry when Curb Your Enthusiasm started.

The difference is that everyone else in Seinfeld and Curb were fantastic actors and actresses, but that isn't really the case here.


In fact, for me, the only convincing character was Whitney's boyfriend, Alex (played by Chris D'Elia).

Everyone else really came across a little awkwardly.

Sadly, that even included Maulik Pancholy (who is fantastic as Alec Baldwin's assistant Jonathon on 30 Rock), so perhaps the problem goes beyond just acting.

There were moments that were somewhat funny, and lines that should have been funny, but I wasn't really finding myself extremely amused.

Overall, I feel like something is missing from the presentation; it just isn't working.

Interesting Fact: Whitney Cummings also created 2 Broke Girls, which doesn't also star her, and is much, much funnier.

First off, I am a huge Zooey Deschanel fan.  She is unbelievably talented.

Here she is playing a slightly neurotic young woman who finds out her boyfriend has been cheating on her.  She moves out and ends up moving in with three guys she finds through Craig's List (or some internet equivalent).

The pilot does a very good job of setting up the characters (although one of them, Coach, is actually replaced in episode two), but doesn't quite fire on all cylanders right off of the bat.  But then, very few sitcoms do at first.  In fact, in the past ten years, only How I Met Your Mother and Modern Family have started out of the gate at the top of their game.  Many, many other great sitcoms, including Parks and Recreation, which is probably the best sitcom on right now, and Big Bang Theory started out worse than New Girl did.

Although it is cheating a little bit since this is a pilot review, if you stick with this show to the third episode, you will be rewarded.  It really hits its stride with episode 3 and you can see how good this show is going to be.

For my review of Up All Night and Free Agents go here...

For my review of 2 Broke Girls and How to Be a Gentleman go here...

For my review of Pan Am and Prime Suspect go here...

(My thoughts after Terra Nova, although not a proper Pilot Review, is here...)
Posted by Josh Man at 6:27 PM