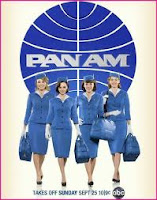 Like Playboy Club (which NBC has already cancelled), Pan Am is trying to cash in on the success of Mad Men, and America's apparent interest in the 1960's.

I would argue that America is more interested in the fantastic storytelling and amazing characters in Mad Men as opposed to the time period (although it certainly doesn't hurt the show any).

Luckily, Pan Am seems to have gotten that.  The show is set in the 60s, and apparently will take full advantage of that, but it is also built around character and story.

Taking a page from LOST, the pilot spends a good portion of the time setting up the characters through their backstory with flashbacks.  This doesn't always work, but LOST used it to great advantage, and Pan Am seems to be following suit.

All of the characters and their backstories were intriguing, and the whereabouts of one of the stewardesses sets up an interesting mystery that should drive the show for at least a little while.

This is a show that is definitely worth checking out.

Interesting Fact: The show was created by Jack Orman, who was a long time writer for ER and then served as the Executive Producer of the show.

Prime Suspect has a lot in common with a recent NBC television show, Mercy (which I wrote about here).  A strong female character who has problems at times with the male authority figures where she works, but there are some key differences.  Where Mercy featured a female character working in a profession that was common for women, nursing, Prime Suspect has a female character that is a Homicide Detective in a squad where all the other detectives are men.  (Point Prime Suspect).  Mercy's main character had a backstory that saw her returning from serving in Iraq and dealing with Post Traumatic Stress, Prime Suspect's main character has just worked her way up the hard way, but due to an old relationship, there are those who wonder if she really earned her new position.  (It's not a bad backstory, but Point Mercy).  Mercy had fantastic supporting characters, Prime Suspect hasn't spent much time developing anyone beyond their lead.  (Point Mercy).  Both shows feature Peter Gerety as the main characters father.  (Tie).

The show has potential, but the pilot didn't wow me, while there isn't much negative you can really say about it either.  It is basically a run of the mill procedural with a strong female main character being the only thing really setting it apart.

Interesting Fact:  The show is a remake of a UK serial that starred Helen Mirren (The Queen) in the lead role.

For my review of Up All Night and Free Agents go here...

For my review of Whitney and New Girl go here...

For my review of 2 Broke Girls and How To Be A Gentleman go here...

(My thoughts after Terra Nova, although not a proper Pilot Review, is here...)
Posted by Josh Man at 7:43 PM