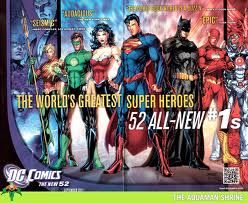 As always, this is a Simulblog being conducted by me, Fat Train, Justin of Cavemen Go, Chad of Political Jesus, and occasionally Arthur of Arthur the Lesser.

Justin's blog on week four can be found here...

Chad's blog on week four can be found here...

Since this is the final week of the Simulblog (and the fact that I've been sick has made it ridiculously late; after all, this week gives us our first #2s) I have decided to refrain from doing a book by book review and instead focusing on an overview of the entirety of the number ones.

The surprise storytelling and fantastic art that were on display in Animal Man, a book I would have not been reading at all had I not agreed to take part in this Simulblog.  Having already read number 2 which was released today, I can tell you that the story continues to surprise and the art is even better in issue number 2.  This book is, for me, the clear winner of the reboot/relaunch.

The new take on Superman, returning him to the beginning of his character in the 30s and 40s in terms of story and power (although in a modern context) along with a concentrated effort to have him be the Superman of the people, a Social Justice Superman, that we are seeing in the Grant Morrison penned Action Comics.

The story developing in Batman and in Nightwing capturing two of my favorite Gothamites in a way that none of the other issues devoted to the Bat-family seem to have been able to.  Bruce/Batman is captured perfectly in the first issue, and the story is fantastic.

Speaking of the Bat-family, Batgirl was outstanding as well, and with Gail Simone writing probably will avoid some of the problems the relaunch has had (more on that later).

The connections that are building up around the characters, such as Supergirl's super hearing manifesting by hearing dialogue that was taking place in other books such as Aqua-Man.  In Detective Comics #2, a character references Oliver Queen (Green Arrow)'s company in a conversation with Bruce Wayne.  I like the idea of the universe being connected and this relaunch offers an opportunity to build that universe from the beginning and for the most part, DC seems to be doing that.

WHAT I HAVEN'T LIKED

The fact that many of these reboots/relaunches have either been very pedestrian (Green Arrow) bringing none of the real excitement that a number one should have has been disappointing, as has the fact that some of these supposed reboots/relaunches clearly required prior knowledge in order to get into the series, which seems to defeat the whole purpose of starting over at number one (Legion: Lost and Legion of Superheroes).

Another thing that has bothered me is the new time-line which doesn't seem to make sense, or at the very least is impossible to keep track of.  There is a mass break out of Arkham Asylum in both Batman and in The Dark Knight and it doesn't seem like there is too much time difference between any of the four Batman titles, which seems like a bit of a waste.  I enjoy that Action Comics and Superman take place a different times, allowing us to see Superman now, as well as where he came from and how he developed.  A book like I, Vampire, which came out in the last week of the new number 1s was very interesting, but with the epic events taking place in the issue make me think that those are events that would draw at least the attention of some, if not all, of the heroes, but it isn't something that appears to be on the radar of any of the superheroes or the various teams.  The Teen Titans first issue seems to make it appear as if the team is being formed for the first time (especially since Action Comics seems to say that Superman is the first super-powered being ever) yet in Red Hood, it appears that there is still a history of the Teen Titans and that Starfire was once a member of the Teen Titans.  Then, if Superman was the first super powered being, why is Hawkman trying to get rid of the Nth Metal that has made him Hawkman, as if he's been a Superhero for some time.  Obviously Action Comics takes place some 6 years ago, so there is time for these things to develop, but not much time, and it would be helpful if the timeline were a little more clear.

Quite simply, I've hated the objectification of women that seems so prevalent throughout many of these books and the fact that diversity is still not really been fully addressed.  After all, have you realized that everyone of the members of the Justice League have their own book except for Cyborg, the one non-white member of the team?  That's a little troubling, but the objectification of women has been far, far more embarrassing.

The primary example of this has quite clearly been the portrayal of Starfire in Red Hood and the Outlaws.

The idea of an expansive ideal of womanhood, something beyond the typical or patriarchy driven vision of what womanhood should look like or represent, can be vast and express itself in many different ways; however there is still some question of who gets to envision or portray those new and expansive ideals.  Written by a male, Kory, called Starfire, is portrayed throughout Red Hood and the Outlaws as an object.  Her costume, like many of the costumes of female characters in comic books, is very revealing, but the writer and artist (both men) put her into an even more revealing bikini, and have a teenage male snap a picture with his cell-phone as she comes out of the water.  He then puts that picture up on the internet for others to ogle. 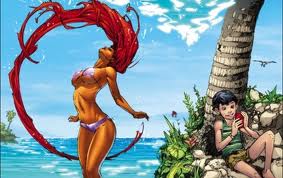 It is revealed early in the book that she is in a sexual relationship with Jason Todd, the Red Hood, and then she offers to have sex with Arsenal, Roy Harper.  When he protests that she is sexually involved with Jason, she tells him that sex is not for love, but for enjoyment.  This conversation is the only time we are given anything from her perspective.  The author maintains that she is a sexually liberated female, and any uproar over her sexual identity is misplaced, after all, people don’t fret as much about male characters who have multiple sex partners or a liberated view on sex and sexuality.


While that might be true, I don’t think that the uproar is due to the attitude that Starfire has towards sex.  The problem is the fact that throughout the book her character is the subject of objectification, and the desire to have meaningless sex with both of the main male characters in the book comes off across more as a teenage male fantasy of what a sexually liberated woman would be like as opposed to a fully developed female character who happens to have a more loose view of sex and sexuality.

Many of the women that work at DC have acknowledged that they were troubled by the portrayal before the release of the issue and asked the writer to tone it down or use the fact that the character used to be a sex slave on another planet to explain why she might be acting in this manner, but the writer refused, claiming that focusing on her past would only be treating her as a victim, seeming to ignore the fact that by portraying her solely as an object for male fantasies was victimizing the character as well.

This is only one of the most blatant examples.  DC likes to point at Batwoman and claim diversity because of the fact that she is a lesbian, but in the first issue, she spends most of it in some form of undress with another woman (not in a sexual way).  Again, it seems more of a teenage fantasy of what lesbians should do rather than really dealing with issues that a lesbian superhero might face.

Voodoo, released in week 4, is about a bi-sexual stripper who literally becomes a monster that kills as she gets naked, and then takes the form of the man she killed, seeming to make a statement that women are inconstant and monstrous, and have worth only due to their bodies.


It is not that a stripper/alien can't be a strong character, just that the way these characters are being written are as objects, not characters.


If it were just one or two books, it wouldn't be that big of a deal, but it is in a multitude of them, and each week as well.


DEFINITELY WORTH A LONGER LOOK

Until Next Time, feel free to comment on any of these thoughts or bring up anything else the entirety of the new number ones might have brought to the forefront of your own consciousness.
Posted by Josh Man at 8:40 PM