Missing, Believed Wiped, or How I Still Have Some Hope 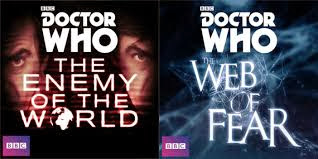 Whichever of those fits you, let me assure you that the recent release of episodes of Doctor Who for these two stories (The Enemy of the World and Web of Fear) was big news.

Film is expensive.  In the 1960s and 70s, the BBC had no idea how cherished past episodes of Doctor Who would become.

In fact, episodes were rarely repeated.  The reason for this was in part because actors feared that once studios had enough material, they would simply cycle through it, thereby taking out the hassle of having to pay actors.  Therefore, actors stipulated that use of reruns were limited, meaning studios had to consistently produce new material.  And remember, at the time, home video wasn't even a remote possibility.

Since shows weren't really ever re-aired, there was no thought of selling these episodes to viewers at home to watch at their leisure, and the BBC needed film for new shows they were shooting, many of the original episodes of Doctor Who were wiped in order for the film to be used for a new show.

Originally, 147 episodes were missing/believed wiped.  Thanks to a variety of sources (private collectors, foreign studios, etc.), 50 have been returned

The most recent returns, five episodes of The Enemy of the World (completing that serial) and four episodes of The Web of Fear (leaving only one missing episode from that serial), constitute the largest single recovery to this point, and that's a big deal.

The BBC upon announcing the find then released the episodes on iTunes, allowing people to watch these episodes for the first time in 45 years!

These episodes (and quite a few others) were recovered thanks to the fact that the BBC had sent copies of episodes overseas to other studios.  Tomb of the Cybermen was found in Hong Kong.  These episodes were found in Nigeria.  Other episodes have been found in Australia, Cyprus, New Zealand, and even Canada!

It is certainly very exciting that the largest single haul of all time of missing Doctor Who episodes was found and released in time for the 50th Anniversary of the show.

Some might also say it is a little convenient.

Just before the announcement that the rest of the episodes in Enemy of the World were found and all but one episode of Web of Fear had been recovered, there were many rumors that many (some reports said all, but sadly, that is impossible as the 7th episode from The Dalek's Master Plan, The Feast of Steven, was never copied and distributed, and more than likely neither were many of the other episodes from this serial, although three episodes have turned up, so with the exception of Feast of Steven, there is slight hope where these stories are concerned) episodes were recovered.

The BBC denied the rumors wholeheartedly, claiming that no episodes had been recovered.

We now know, of course, that at least nine were recovered, so there is no doubt that the BBC's denies were to some extent lies.

The most believable rumor (because, let's face it, even the 90+ number is almost certainly false) claimed that three stories had been found, and even named the stories: Marco Polo, Enemy of the World, and Web of Fear, often referred to as the MEW rumor, taking the first letter from each story.  Considering that it turned out that Enemy of the World and Web of Fear actually were recovered, there is some hope that Marco Polo has been recovered as well, but that it is either still being restored, or that the BBC is holding off on announcing it until after the 50th Anniversary in order to extend the celebration.  What would make the finding of the episodes of Marco Polo significant is that it would mean the entire first season of Doctor Who would be available for the first time since 1963-64 when it aired (although two episodes from the final story, Reign of Terror, are missing, but have been animated for a DVD release).  A complete Season 1 Box Set would be sure to follow.  (I guarantee that I, for one, would purchase it, even though I've already seen and own many of the first season episodes, with, of course, the exception of Marco Polo).

Another possibility in regards to found episodes that people have floated is that Phillip Morris, who found and returned the 9 episodes of Enemy of the World and Web of Fear, actually found many more episodes (the episodes of Marco Polo among them perhaps), but is still negotiating their return.

In order to gauge consumer interest in previously missing episodes, two of the stories were released on iTunes.  Looking at the sales of these stories then would allow the BBC to more properly estimate what they should pay Morris in order to recover further missing episodes.

I actually hope that this is the case, because the response of the public to the two stories on iTunes was massive.  They immediately upon release became the top two seasons (as they were released as "seasons") sold on iTunes.  I bought both first thing in the morning after they were released, and I was not alone.

Myself, I think that at least Marco Polo has also been recovered, and perhaps some more episodes (and hopefully complete stories) as well.

Following the 50th Anniversary, we might finally hear of more episodes that we can finally see again (for many of us for the first time).

A particular date to watch for this info is December 21st.  On that date, the British Film Institute is holding it's Missing Believed Wipe event, where they have announced that they are showing an episode of Doctor Who that was long believed missing.  However, they haven't announced which one.  It could easily be one of the nine recovered episodes, but due to those episodes having (by that point) long been available to viewers for purchase, many believe that this episode will be something that no one in the public will have had an opportunity to view as of yet, like perhaps an episode from Marco Polo?

We'll have to wait and see.

Considering that it wasn't that long ago that there were 106 episodes missing, believed wiped, and today there are only 97, we need to celebrate the recent large find, even if no other episodes were actually recovered.

And if further episodes were recovered and are subsequently announced, that will merit a large celebration as well.

And we might as well be patient.  After all, these episodes have been missing for more than 40 years. If they are somehow returned to us, what is waiting a few extra months to find out about it?

Until Next Time, although, with that being said, I really do want to know if there are more episodes about to be announced and when I might be able to see them.  In case you were wondering, I fall into the "follow this sort of thing with a close eye" camp.  If and when there is any news on new episodes recovered, I will let you know!
Posted by Josh Man at 8:17 PM