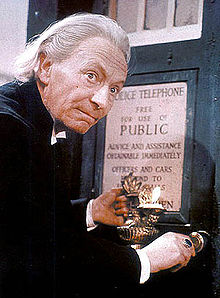 48 Years ago today, BBC introduced the world to an amazing and enduring character, The Doctor.

A man from another planet with the ability to travel both time and space.

The Doctor has shared knowledge with us, protected us, and joined with us as we ran from danger and pain.  (The Doctor could probably be considered a version of a Process Theology God, come to think of it, but that's a post for a different time).

We are now, in year 48, on our 11th incarnation of the Doctor, and while Doctor Who is still very popular in Britain, where the show began, the Doctor's popularity around the world has skyrocketed to new and incredible heights.

For all those that have never seen the show before, Netflix Instant Viewing has Season's (Series) 1-5 of the new series that began in 2005 (after a hiatus that makes the waits we endure through for Fringe, Community, Psych, and others seem like a pittance).

But today, in honor of the birth of the show, I will try to embed the episode that aired that night, 48 years ago.

AN UNEARTHLY CHILD Part One

Until Next Time, speaking of Doctor Who, come back soon for a new Simul Blog on the best shows currently on television.
Posted by Josh Man at 1:56 PM

Email ThisBlogThis!Share to TwitterShare to FacebookShare to Pinterest
Labels: Doctor Who, The Unearthly Child