It is clear to me that the Impossible Astronaut can in no way be Melody Pond/River Song.

River uses all of her remaining regenerations to heal the Doctor.

Therefore, if River were the little girl that we saw in The Impossible Astronaut/Day of the Moon, and that little girl kills the Doctor, then River would remember that happening.

She would have already succeeded in killing the Doctor as a little girl, and therefore wouldn't have needed to worry about it in Berlin right after regenerating into our River.

I believe that it might be possible that the little girl in 1969 was in fact Melody Pond, the one that we saw regenerating in Day of the Moon, but the person in the astronaut suit in 2011 is in no way Melody Pond. 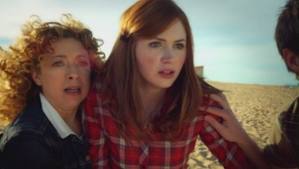 Look at River's face here.  She has no idea what is going on.  She is not the person in the astronaut suit.

I might be able to buy that River was at one point in the astronaut suit, back in 1969, but it isn't her that ultimately kills the Doctor.

Although you have to wonder why she would have been able to go back to 1969 if the little girl in question was in fact her, considering she couldn't help with Demon's Run (A Good Man Goes to War) because of the fact that she was there as a child.

That is part of the reason that I always felt like the little girl at the beginning couldn't actually be River.

It is possible, however, that since the Silence were involved, River has some trouble remembering that part of her life, although those memories should have come back when she was looking at them.

I still like the idea that the Doctor, now knowing everything that he does about River, goes back and somehow saves River from the computer in the Library.

Then River and the Doctor can have a child  (in both of their futures) and that child somehow gets kidnapped by this nefarious group and that child is the one in the astronaut suit who ultimately kills the Doctor.

A few other things that I loved about this episode... 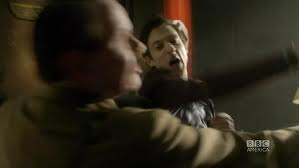 I also loved the call back of Rose, Martha, and Donna, as well as the guilt the Doctor feels for what their association with him caused for them.  That was really well done.  And it was great to see them in the TARDIS again.

Something that reminded me of some older episodes were the mention of the state of temporal grace in the interior of the TARDIS.  The Tom Baker story, The Hand of Fear from season 14 (the last to regularly feature Elisabeth Sladen as Sarah Jane Smith) features the Doctor telling Eldrad that since they were outside of time Eldrad's weapons would not work, Eldrad couldn't hurt Sarah or the Doctor, and they couldn't hurt Eldrad.

Many later episodes seem to have forgotten about this, or threw in a line about it perhaps being broken, but this week, the Doctor claims that it was always just a bluff anyway, his way of getting others to think their weapons wouldn't work so that they wouldn't try to use them.  Beautiful bit of continuity clean up.

I was also reminded of the first Christmas special, David Tennant's first go round as the Doctor.  He was able to regrow his hand since he was early in his regeneration cycle, River threw off an execution style shooting, plus purged a nasty poison out of the Doctor.  Being in your new body right at first makes you pretty freaking awesome, but it still doesn't really make up for the horrible side effect of being really vulnerable before you make it to that next body.  Which is what allowed the Impossible Astronaut to kill the Doctor before he was able to regenerate.

Until Next Time, We now know much more about River than River knows about herself, which is a full switch from before, that should be fun to watch as the remainder of the season progresses.

And of course, the big mystery of how to get around the Doctor's impending death still looms.  See you next week!
Posted by Josh Man at 9:18 PM