I'm feeling a little under the weather, but fear not, the 7th Annual My Thoughts As I Had Them During the Oscars post will be up before the end of the week.

Tonight, however, is the premiere of a new show, Awake, which has a fantastic premise. 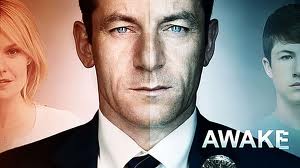 Awake airs on NBC at 10/9c and stars Jason Isaacs (in a decidedly different role than that of Lucias Malfoy) as Detective Michael Britten.

The show opens with a horrific automobile accident Britten, his wife, and his son.

Only two of the three survive the crash.

You see, every time that Britten goes to sleep, he wakes up in a reality where the other survived.

Those aren't the only differences in the realities either.

Shrinks in both realities maintain that the reality they are in is the true reality and that the other is simply a dream.  Britten acknowledges that most likely they are correct, although he cannot for the life of him tell which is real and which is a dream.

Much like the episode of Doctor Who, Amy's Choice, I'm not sure that there really is a right answer to the question as asked.

It certainly seems as though there is some connection between the two realities that goes deeper than one being a dream and the other being real because the cases that he works (as a detective) in each reality although different have similarities.

Whatever the ultimate truth underlying the show's interesting premise, this promises to be an interesting take on the tired cop drama, much like the recent Life On Mars.

I, for one, thought the premiere was very interesting and well done.

Until Next Time, if this show can continue to impress, my rankings in the 8th Annual Josh's Choice For Best New Show of the Season might get a little shaken up!
Posted by Josh Man at 6:52 PM