Why Kristen Bell is SOOOOO Awesome 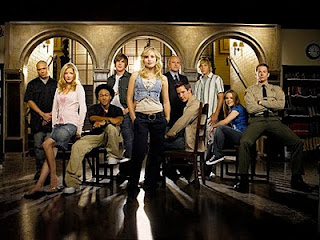 Clearly it is time for you catch up on this fantastic show, and thankfully, Netflix is here to help you with that, as all three seasons are now on Instant Viewing.

That isn't the reason that I am writing today, however.  Since the series was canceled a few years ago, there has been a persistent rumor that there will be a Veronica Mars movie at some point.  The actors are all on board, as is the creator of the show Rob Thomas (not the same as the one from Matchbox Twenty, but the one who also created the fantastic show Cupid... twice).

The problem is that Warner Bros. who owns the property isn't sure that the movie would make money (although I'm sure I'd see it numerous times) and therefore isn't worth making.

Kristen Bell, who rocketed to stardom last year in Forgetting Sarah Marshall but to those of us who watched Veronica Mars was a star far earlier, disagrees with Warner Bros. and has gone to Twitter to ask that Warner Bros. either acknowledge that there is an audience for this film or let the project go so that it can be made independently.

Kristen Bell doesn't need Veronica Mars, she is turning into a chick flick star and could easily do those types of films for the next fifteen to twenty years, but she knows what a great character Veronica is and how strongly the fans of the show want more from the smart and sassy (and Battlestar Galactica quoting) Veronica Mars.

If you want to get in on this, and really why wouldn't you, send @wbpictures telling them so with the hashtag #veronicamarsmovie

And join this Facebook group while you're at it!

Until Next Time, So glad that Kristen Bell is as on board as we are with this dream.. Let's make it happen!
Posted by Josh Man at 11:30 AM